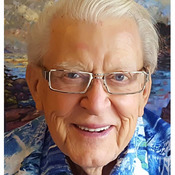 Al Simon passed away December 10, 2017 at the age of 86. He is survived by his wife Irene and 2 daughters: Carol (Albert), Brenden and Robyn Losch of Kelowna and Joan (Gabe), Jake and Becky Roder of Surrey, BC.

Al was born in Regina, 1931, attended the University of Saskatchewan, then graduated in Pharmacy at UBC.

In 1965 he moved his family to Kelowna and continued his pharmacy career at Willit Taylor Drugstore on Bernard and Pandosy (now the Starbucks). Later he managed the pharmacies at Shoppers Drug Mart and Safeway.