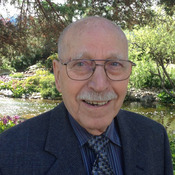 Fred Missal passed away peacefully into the arms of his Lord and Saviour on October 16 at Hospice House after a brief battle with cancer. He was 89 years old. He is survived by his loving wife of 60 years, Martha, 2 daughters, Joy (James) Johnston and Karen (Jerel) Forsberg. He also is survived by 4 grandchildren Brett (Amy), Chelsey (Bryce), Kirsten (Nick), and Graham, plus one great grandson, Witton.

He was born in Poland in 1928 and immigrated to Canada in 1954. In Winnipeg he met his wife Martha and they were married in 1957. From there they moved to Toronto where the girls were born and then on to Saskatoon and into Kelowna in 1970. Here Fred continued his career as a steel fabricator and worked for many of the local fabrication shops including Monashee, Price Steel, and Kelowna Steel Fabricators making many life long friends along the way. Once retired he was able to pursue his other passion of woodworking and many of his creations are proudly displayed in our homes.

Fred was a true example of a giving and generous person living out his faith in Jesus Christ. He will always be remembered for his sense of humour and how he loved to laugh with his friends and family. Volunteering was a large part of his life with him participating in various missions in other countries plus 18+ years of cooking at the Kelowna Gospel Mission. This lead to him being nominated for Man of the Year in the city of Kelowna in 2012. He lived a full life and commented near the end how thankful he was for everything that he had been able to do. He was a devoted husband, father, and grandfather.

Special thanks to the staff at Hospice House and to Dr. Aldon Lange for their caring support to mom and dad during this journey. Donations in memory can be made to the Kelowna Gospel Mission.

A celebration of Fred