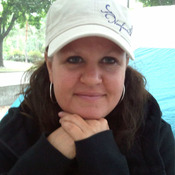 On November 18, 2017 at the age of 46, our most beloved daughter, wife, mother, sister and friend Elizabeth Margaret Henderson passed away at Kelowna General Hospital surrounded by family. Left to carry on, are her two sons John and Matthew Henderson, husband Dave Henderson, mother and father Fern and Jim Van Horn of Kaslo, and siblings Jim (Terry) Van Horn with children Jimmy (Kate) and Madison of Genelle, John (Erin) Van Horn with daughter Ayla of Kaslo and Sarah Van Horn of Vancouver.

Elizabeth was born on March 16, 1971 in Vancouver and spent much of her childhood and youth in the village of Kaslo, located North of Nelson in the Kootenays. Her love of the outdoors led her to a Forestry career based in the West Kootenay and North and Central BC regions, where she specialized in Geographic Information Systems Operation in Prince George. Upon moving to Lake Country with her young family she worked as a CAD designer, producing electrical utility infrastructure and substation drawings. She also took great pleasure in her role as Assistant Soccer Coach and mentor for her son John's team for many years. She had great regard for all her team members, but she never let that soften her expectations for hard work and focus at every practice.