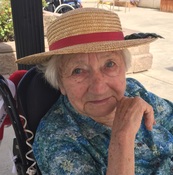 A LIFE WELL LIVED. That is what we can say for Agatha de Tourdonnet (nee Kozeluk) fondly known as Aggie or Mama Bear. She passed away peacefully in Polson Extended on June 18, 2017. She was a character almost until the moment she breathed her last breath. She will be missed dearly by her loving husband Mike de Tourdonnet, her sons Henry and Vincent (Beth), and daughter Renee, brother Alec (Elaine) and family from Edmonton.
When the family moved from Edmonton in 1966 Mom continued her nursing career at Vernon Jubilee Hospital. She was an active member in Planned Parenthood and Hospice. She volunteered with the Garden Club and Allen Brook Nature