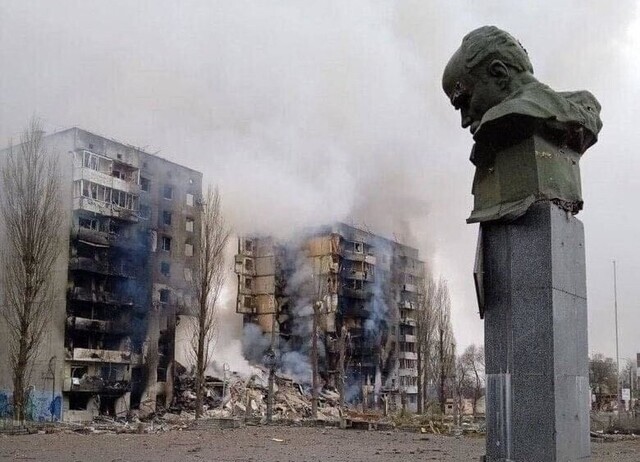 Photo: The Canadian Press
The war in Ukraine has brought devastation to many cities in that country as Russian bombardments continue.

I am old enough to remember the regular nuclear war drills at school: the bells prompting us to curl into fetal positions under the wooden desks, or in the more involved version, hands held with someone on your right and left, your nose and toes pressed against the cold, concrete basement walls.

I wondered, beyond the physics of whether our drills would save my life: who were these people who would take away my afternoon recess, even shorten my lunch break or my schoolyard frolic on a sunny day?

We feared those people irrationally. Once their leadership tumbled, so did the apprehensions about the people they governed. Now, though, we fear a madman irrationally. We are stoking his aggression with tentative, glacial gestures. We are permitting him to send teens into combat to indiscriminately take the lives of civilians with whom they would not likely have any quarrel.

I have listened to diplomats and read the considered assessments by the international academics and former military leaders. Their general take is that the invasion of Ukraine has gone horribly wrong for Russian president Vladimir Putin: that he has painted himself into a corner by misinterpreting the cohesion of the West and the virility of Ukraine, that the people he governs are only now tweaking to the insanity of his menacing, that his generals will keep his finger off the button to end the world and that sometime soon this will culminate in Russian regime change.

I can understand that. What I can’t understand is why, until Putin is deposed, Ukraine has been left to its devices in an evolving slaughter.

And what I really can’t understand is why our country’s leadership is not recognizing the significance of this episode to our citizenry, to our history and to our limited credibility in the world’s eyes. This is rapidly becoming another epic fail for Justin Trudeau. No amount of economic sanctions will matter to the man on the other side of the table.

We are the world’s third-largest Ukrainian country, only behind Russia and the Ukraine itself, with more than 1.3 million residents of Ukrainian descent. We have more skin in this game than in any other conflict for more than a generation.

We ought to be leading other countries, not tucking ourselves in behind them, more urgently pushing to protect the families of our citizens abroad. We ought to be taking the cue from its president, not from our allies without the same bloodlines in play.

When (Ukrainian President) Volodymyr Zelenskyy pleads for international help to control his country’s airspace, or at least to borrow the fighter jets so Ukrainians can do that for themselves, we ought to recognize that it will be countless thousands of our country’s extended families he would be protecting.

This is really an attack on us. And when we respond the way we have, the carnage implicates us.

The war crimes are not an allegation requiring eyewitness testimony and a lengthy judicial process. They are on live TV. They connect and incriminate the president and the military brass choosing the maternity hospital and violating medical neutrality, the long and narrow roads out of the country under attack, the districts of the country’s shattered cities and the civilian victims.

We abhor but we abstain. And rather than hastening the decamping of the country to ours, we have established a migration process that will be weeks before it takes effect.

We hear that a defence of Ukraine’s airspace against the insurgence of Russian arms and supplies to conquer the country amounts to an invitation to World War Three. We assume that Russia – the people, not just the occupants of the Kremlin – want the fight. This feels akin to my school days with the Cold War drills, about which we should have learned better. There is little evidence this is a conquest spurred by the populace; it has been Putin’s plan.

The other principal worry is that intervention by NATO forces is an abrogation of its core principle to defend member nations rather than police the world. But NATO was not built for what we have seen in the last two weeks. It was not ready, just as our leadership wasn’t, and if Putin is not deposed, he will continue to wreak havoc, conscious that the line of defence NATO has drawn is one he can accept and exploit – and increasing through further repression in his country if his war efforts founder.

Justin Trudeau famously claimed when he took office that Canada was back, but his attention to global affairs has been pitiful: five ministers in six years, the latest one inarguably the least qualified. He has been preoccupied with optics, and it’s arguable he no longer carries any standing to lead.

There is a parallel in this global decline of the Trudeau brand to that of his father at the end of his career with his fruitless Peace Initiative: lots of photo opportunities with world leaders, nothing to show for it. Of course, he followed that with his famous long walk in the snow, something his son might well think about if he continues to permit Ukraine such suffering.