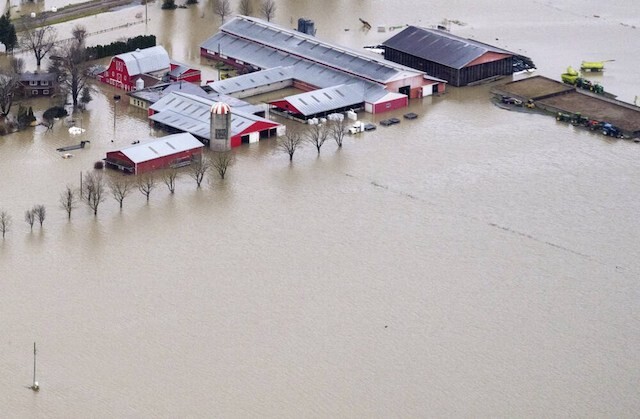 Photo: The Canadian Press
Flood waters surround a farm in Abbotsford on Nov. 23. Jesse Zeman and Neil Fletcher argue that the cost of repairing disasters such as this year's Lower Mainland flooding is far higher than building up natural ecosystems that can protect us. JONATHAN HAYWARD, THE CANADIAN PRESS

Sustained funding for ecosystem restoration in B.C.’s forests and waterways could reap billions of dollars in savings down the road.

The systematic defunding of natural resource management has delivered exactly what you would expect: Some of the worst fire seasons in B.C.’s history have come in the past five years, along with two equally catastrophic flood seasons.

The share of the provincial government’s budget dedicated to renewable natural resource management has shrunk by about 75 per cent over the past 30 years, with obvious consequences: People put out of their homes, more than one million farm animals killed, hundreds of people dead from smoke-related illness, and record low fish and wildlife populations.

And it’s not like we didn’t know it was coming.

The 2017 B.C. Flood and Wildfire Review and its recommendations were intended to inform government actions in advance of the 2018 flood and wildfire seasons.

But that wasn’t the first time B.C. was warned of future catastrophe and offered solutions. The government has had nearly two decades to consider the Filmon report, which is bristling with recommendations on strategic logging and fuel reduction.

An aggressive program of controlled burns and fuel mitigation would likely have saved billions of dollars in fire fighting and recovery costs. Wetland restoration and changes to logging and road densities may well have cut the bill for flood damage this fall by billions of dollars.

Then, as now, municipal governments were relied upon to foot the bill for improvements to Crown land to protect themselves from fire and to maintain wetlands and flood protection. Few can afford to do either.

Sadly, we don’t need to guess at the cost of doing nothing, do we? The Bank of Montreal believes that the cost of putting things right in Abbotsford alone after November’s atmospheric river event will exceed $7.5 billion.

The economic impact of a region-wide flood on the Lower Mainland could be as high as $30 billion.

Without a rapid change in priorities, we will continue to spend orders of magnitude more on recovery than we would restoring natural assets and infrastructure that protect us.

Diking and drainage schemes of the Fraser River delta and the south Okanagan have sidelined 70 per cent to 85 per cent of historic wetlands, forfeiting the environmental services they provide.

A 2018 Insurance Bureau of Canada report called for the protection and restoration of remaining wetlands in settled areas of Canada, as water damage is one of the greatest threats to their industry.

The provincial government has committed to creating a Watershed Security Fund and strategy as well as “Together for Wildlife,” a provincial strategy to improve wildlife and habitat stewardship that could provide long-term sustainable funding to projects that combine forest management, wetland restoration and wildlife management in a coordinated way.

Stable, dedicated funding is essential to support local decision-making and to encourage the long-term planning and local solutions needed to respond to changing watershed conditions brought about by climate change.

The Real Estate Foundation of B.C. is administering more than a hundred projects across the province through the HWI, employing 700 people to restore watersheds, create local capacity and strengthen relationships with First Nations. Funding for those projects will end in the coming weeks and months.

While the provincial government committed to a watershed security fund and strategy before the last election, neither of those have been implemented. Projects that are desperately needed are simply fading away.

Jesse Zeman is the executive director of the B.C. Wildlife Federation. Neil Fletcher is the director of conservation stewardship.