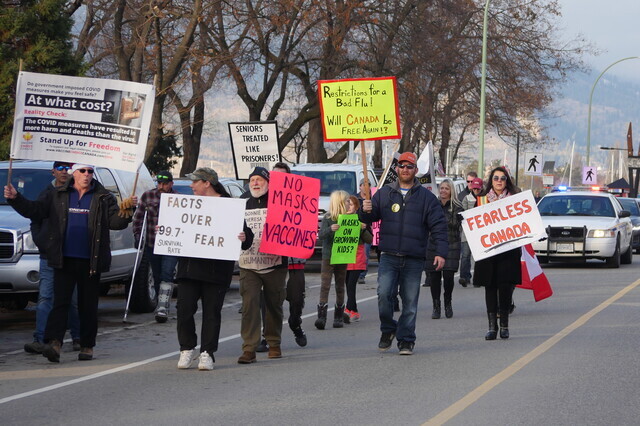 Two metrics are missing in all the statistics continually posted by the government as the COVID-19 emergency drags on.

One is the level of genuine concern, mistrust, resentment and off-the-wall anger that’s prevalent in that minority of people who don’t buy the argument that vaccination is the safest most effective way to contain risk from the coronovirus.

The other is how much that is increasing due to mandatory vaccination orders coming into effect in the public sector and the commercial world. It can’t be quantified, but it seems to be building as various requirements for shots squeeze them further out to the margins.

Another 3,561 people got their first dose as of last Friday, 3,078 in the previous day’s report and 2,787 the day before that. The double-dose count also inches up. So every day the cohort of unvaccinated people — now about 10 per cent of the population — reduces slightly. But anxiety and resentment seems to be growing in that remainder, judging by public demonstrations, displays of defiance and hate mail. They’re getting backed into a corner by their friends and family, by businesses and by the government.

The loudest and most extreme, as usual, get most of the attention. They’re storming into schools, parading down streets and outside of the homes of politicians, or raging on social media.

In the background are more thoughtful vaccine-hesitant people who just aren’t sure. They have personal health situations or belief systems that don’t accord with the party line on getting shots. With more mandatory requirements for shots, some are getting them despite their misgivings, just to keep their jobs, or retain the option of going out for dinner. The ones I’ve heard from are getting edgy.

It’s tempting to just quote the hate mail because it’s so colourful. But the quieter more rational concerns among the hesitant are the ones that should be addressed.

One person wrote that everyone makes a risk calculation on the issue and those who decide against shots shouldn’t be demonized “lest we lose our status as a free society.”

Another said that “illegal and immoral restrictions” are being imposed on people just for choosing to remain in the (unvaxxed) control group. “Many have now been threatened with loss of job, and are faced with the unpleasant decision to join the experiment or lose their income.”

Hesitancy was building years before COVID-19. Health Minister Adrian Dix staged a “measles catch-up” campaign a year before the pandemic hit because the percentage of kids getting immunized against it had slipped significantly, from the 90 per cent range to about 80.

Officials were notably shy then at addressing the reasons why that rate had dropped, preferring to stress the positive. But anti-vax sentiment had to be a factor. They’re relatively few, but it seemed clear then that officials were treading lightly out of regard for how intense they are.

As federal, provincial and other public bodies mandate shots, the argument could heat up. The vaccination program developing for children aged 5-11 is another factor.

(One reader described that as “stabbing innocent kids with this toxin,” which shows how far officials have to go in terms of reassuring people)

Still the huge body of evidence that it’s more dangerous not to get the shots is driving the government to get more insistent.

Discussing the injunction the government won against a defiant restaurant in Hope, Public Safety Minister Mike Farnworth warned them and others Thursday: “You continue by not complying to put people potentially at risk. Every person in hospital unvaccinated … is taking away a bed from someone who has cancer, or may have another disease, a heart attack. That’s just not right.

“If they’re smart they’ll follow provincial health orders. If not, they may well find themselves in even more trouble.”

But even inside government there is a bit of pushback developing to the mandatory shots order applying to all 30,000 civil servants that kicks in next month. Some are urging opposition to the plan.

Farnworth’s message is a long way from the “be kind, be calm, be safe,” refrain during the first waves of the pandemic. Nerves are fraying everywhere as the global scientific consensus in favour of shots runs into concerned hesitancy and harder-edged concerns about personal freedom.

Long-haul COVID is an established phenomenon. Long-haul political after-effects might become another.

Les Layne is the a reporter with the Times Colonist newspaper in Victoria.