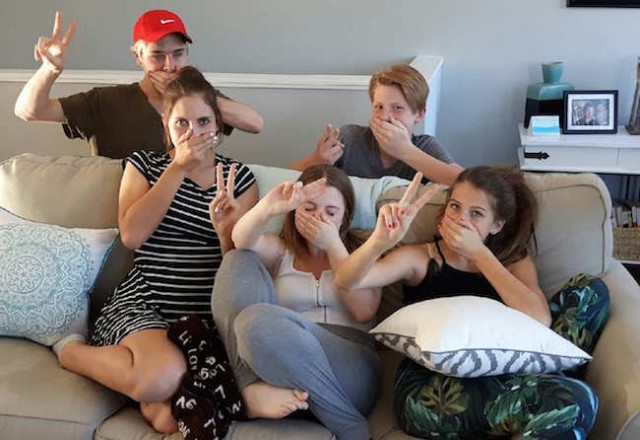 Disclaimer: Some answers have been edited for clarity. Others have been left just as they came out of those babes’ mouths. In an attempt to keep them all liking me, I agreed to edit for language and ridiculousness. There were more of them than me; I had to agree to their demands.

Decode the common teenager and find out what they really think about parents, Trump and social media … and what “Bae” actually means.

How It Broke Down:

In a quest to learn more about the mysterious, surly teenager, I was assigned the task of interviewing a group of them. I jumped at the chance to be a part of something that could be groundbreaking and history making. I have two teens, so I had a large pool of kids to choose from. And soon enough, I had a group of willing participants assembled. Well, the promise of pizza helped.

But then Pizza-gate happened. I brought home two large, magnificent meat and cheese pizzas that were so wrong on so many levels.

The vegetarians opted to not eat the pizza. Instead, but ate the donated meat-less crusts from their pals.

The lactose intolerant kids had to limit their pizza intake due to the cheese. The gluten-intolerant teen chose to overlook the gluten issue and chow down anyways, the heck with the consequences.

The kid who would eat anything did in fact eat most of it.

All the ground I’d gained with the promise of pizza for supper was lost in that instant. And surprisingly, my attempts to make up for my pizza faux pas through offers of croissants and yam fries didn’t improve my standings.

But move forward we did; there was no turning back now.

We all gathered in my living room. Four of them squished onto one couch and one sitting on a bar stool from the kitchen. Me? I had the whole other couch to myself with the dachshund. He was our comic relief (aka- my buffer). I directed the conversation to something they deal with everyday. Parents and school. I asked what their parents do that drives them nuts. The floodgates opened.

Sydney: I hate when I come home from school and the first thing I’m asked is what I have for homework. Like I just spent seven hours in hell and I just need a break. It’s not like I won’t do it. I just don’t want to do it the second I get home. They stress so much about our grades. Well, my parents do.

Everyone: Yes! Oh, my gawd. Like, we get it. We need to get good grades (lots of laughing and eye rolling and squealing).

Courtney: I hate how I get in trouble for swearing, but then they do it. It’s like, how is that teaching me? Oh, just because you’re a parent, you can and I can’t?  And it’s just a word. It can mean whatever. I guess it just doesn’t make sense. And I hate when they talk to me about sex. It’s embarrassing and soooooo uncomfortable. Or when they post stuff about me on their Facebook, like maybe I don’t want to be tagged or posted in something all of my friends are going to see … at least not without my permission.

Jenna: I hate how we don’t get immediate trust. So like, yeah, you mess up. Hello! We’re going to mess up, we’re kids.  But then they don’t trust you after that and they hold it against you for months after. Like, how do we even earn it back if they won't give you the chance (lots of head nodding and agreement)?

Kyle: Calm down with the punishments. How is taking away my phone teaching me something? It just gives you more control over me and makes me madder. And I never think about what I did was wrong. I just concentrate on how I’m mad that you took my phone away. Like I don’t think I’m learning anything like that.

Steven: Totally. Parents have complete control, but then they say they want us to learn to be more responsible but they won’t let us. It’s like “be responsible,” but then they instantly email the teacher if our grade is low or we did bad on a test. Like, give us a chance to at least try and fix it before you take over. We can’t be responsible if they won’t let us. And things like only staying out till 9 p.m. I’ve proven you can trust me, so why can’t I hang out for longer. It’s not like we’re gonna do something bad. We just wanna hang out.  We’re not hanging out doing drugs and stuff.

Jenna: (waves hands in air to calm everyone down). I just think that all you parents want us to be perfect and so you do things that you think is helping us. Like control the money that we worked for and earned, but then complain if we spend it. But you guys spend your money that you work for. Well, it’s the same with our money; it’s ours.  We had to earn it, not you so we should be able to spend it and not have to ask you if we can spend our money. And then for homework and school. We get it. We need to get good grades. But it’s not as easy as you think. We have lives too and are sometimes just tired.

Next week, their views on school and teachers.