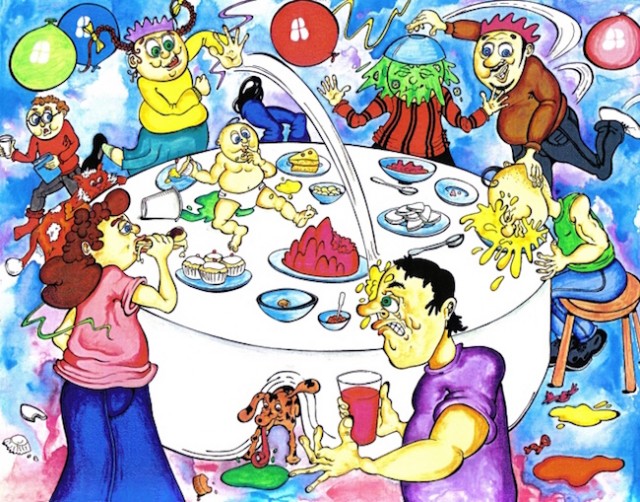 Writer's Bloc guest this week is returning Tanya Gunderson, long time West Kelowna resident and mother of two teens and a mini dachshund. She is a diehard optimist, although the kids know her better as ‘lame’. The dog is on the fence about it

Here's an interesting thought: Not everything is as it appears to be.

First time you've heard that, I’ll bet. Or not.

In this world of social media we’re all riding on - as participants or spectators - I'm constantly feeling envious of posts about superb spouses, superstar children (are there any other kind?), perfect Martha Stewart family holiday dinners, and social lives worthy of gossip columns.

I may actually be guilty of a few of these ‘perfection posts’ myself, but only in the name of keeping up with the Joneses (or is that the Kardashians now?).

It's really not all rainbows and warm fuzzies around here.

The truth is, despite the occasional ‘look at how awesome MY life is’ post, there's a whole other battle raging on behind the keyboard. I am bringing up two kids on my own: A 15 year old girl (going on 27) and a 13 year old boy.

On a daily basis we deal with making the right life choices, not succumbing to peer pressure, and trying not to slam bedroom doors in frustration - and those are just the challenges I personally face.

Supper time in our home is a combination of Chef Ramsay and the Bundy family of Married with Children (without the married part).

Family movie night usually ends up with two out of three of us on the phone, and the other one  asleep in the middle of a movie we couldn't agree on in the first place.

Get togethers with the extended family don’t happen. My side lives far away (and doesn't get along), and the ex's side has allegiance to the ex, understandably.

I have learned, from much life experience, that not everyone's posts and pictures show us the real deal all the time. I mean come on, right? Does everyone really have holiday dinners with their extended families with everybody liking each other the entire visit?

I'm willing to bet that right after that happy smiley photo is taken, Uncle Ralph gets yelled at for being drunk and obnoxious.

And do your kids really give each other hugs every day? I mean if the camera isn’t aimed at them? If your children are anything like mine, they probably have to be bribed by money, ice cream, or both to get that perfect, loving hug for a photo.

Then you have the posts and photos showing how wonderful someone's spouse is. Oh sure. Looking at them, it's hard to believe these people ever argue or have to deal with real-life issues, such as financial stress, job loss or death. And yet, they do. You're just not going to see it on Facebook or Instagram, because it's bad press.

Everyone, and yes, myself included, tries to show only the best of our lives, and there's nothing wrong with that. We all love to share the victories, and it's heady to get 100 likes for that beautiful dinner picture, or to read glowing comments about how awesome your latest family pictures are.

It’s fun to look, too. Just as long as you don't get caught up in thinking your own life doesn't measure up.

If you look at any of my Facebook pictures, you're not going to find one single photo of me first thing in the morning, pre-coffee, or of me in tears because I can't figure out grade eight math homework.

In all of my pictures posted on Facebook, it looks as though the kids and I are loving each other every minute and thrilled about everything in our existence, but the real story is this: We struggle every single day, in a million different ways, ranging from financial to spiritual.

Some of those struggles are good, they do what they're supposed to do, which is to teach us something. Other struggles are a complete waste of time and energy that could be better spent fighting over whose turn it is to clean out the cat's litter box.

We are happy, but there's times when we have to look harder to find it.

So the next time you feel that twinge of jealousy over someone else’s wonderful existence, just remember that to score that perfect post, the person may have had to convince themselves of it as well.