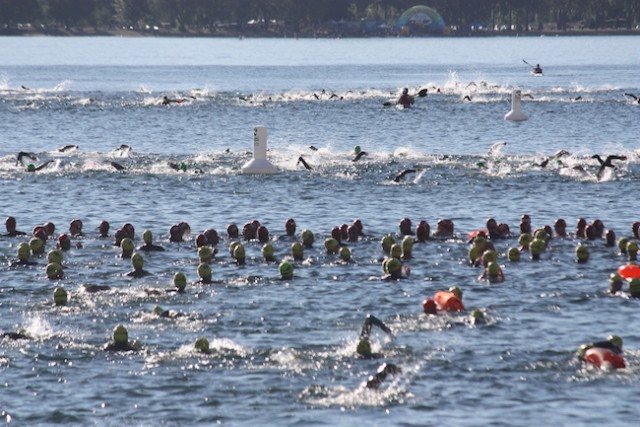 Our guest columnist this week is Jennifer Leach-Trask. Many know her from her 20 years as regional manager of Jazz Aviation at YLW. There are plenty more who know her as that crazy open water swimmer. Jennifer tried retirement, which lasted about five minutes, then launched her new business, JLT Image Consulting.

They call me crazy. And maybe it’s so. It all started innocently enough. . . .

The Interior Savings Across the Lake Swim (ATLS) is an incredibly special event to me. I completed the 2k swim for the very first time in 2000 - it was an amazing experience, and made me feel as though I could do anything I set my mind to do in life.

Sixteen years later I am still doing the ATLS, and many other open water and ocean swimming events. Over the past few years, some of my swims have turned into epic swim adventures.

In 2013, I joined friends Rhonda Talbot of Kelowna and Susan Simmons and Karen Tannas from Victoria, to swim across the Georgia Straight (Sechelt to Nanaimo, 35k). This past September, I joined another group of friends  Rhonda Talbot, Neil Wyper, Scott Taylor, and Phred Martin to swim from Kelowna to Penticton.

Now you’re getting the idea where this reputation for crazy comes from.

It's all about the swim, that crazy swim ~ 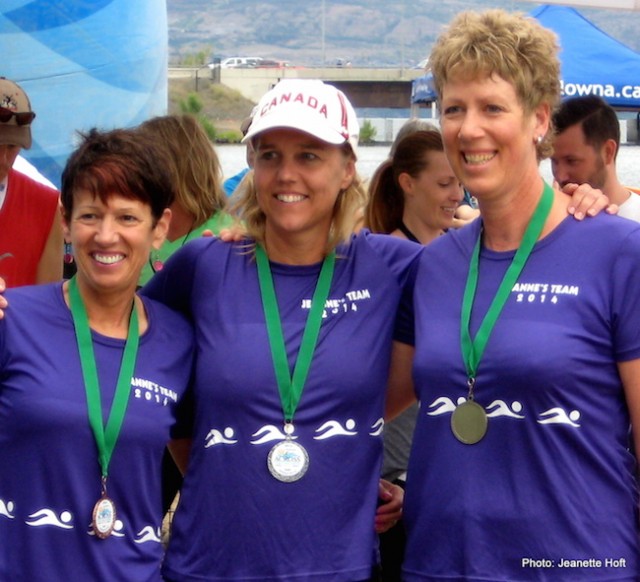 Photo: Contributed - Jeanette Hoft
Left to right: Jennifer Leach-Trask, Lisa Dixon-Wells, and Gail Amundrud (former Olympic medalist), the top three females in the 50-59 age group in 2014. This was the year when swimmers experienced a Seiche wave at the event. The huge freak current happened in the middle of the swim, and it took hundreds of swimmers off course and struggling to get to shore. Many swimmers had to be pulled from the lake because they got stuck in one spot. 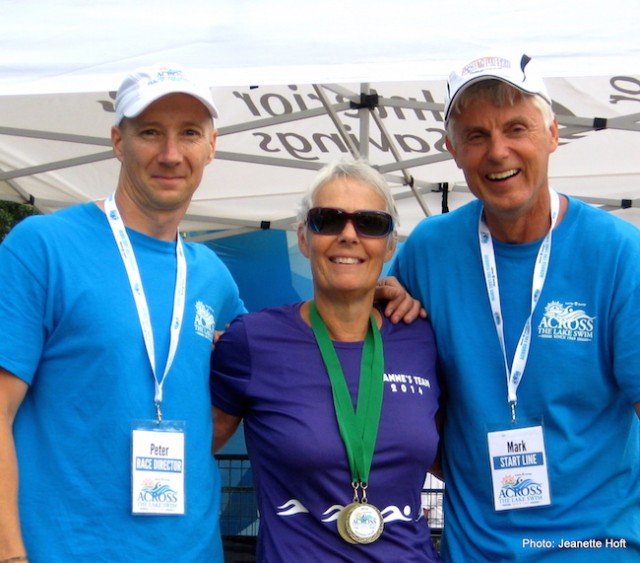 Photo: Contributed - Jeanette Hoft
Peter Rudd - ATLS Race Director for many years, Jeanne Carlsen, and Mark Fromberg - President of the ATLS Society, also for many years. Jeanne Carlsen completed ATLS in July 2014, and passed away from cancer in November that same year. Jeanne was awarded the Jan Morrow Award, which recognizes a swimmer for demonstrating determination, courage, inspiration, and a positive attitude. 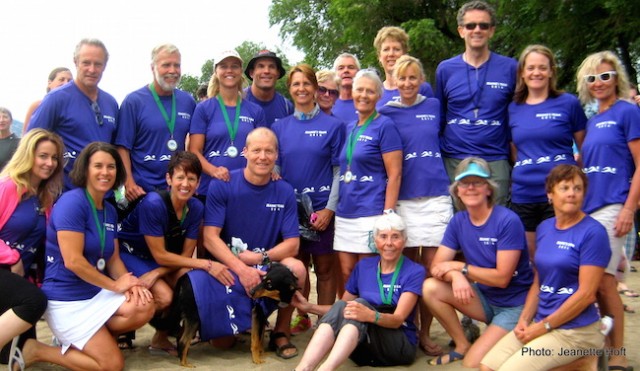 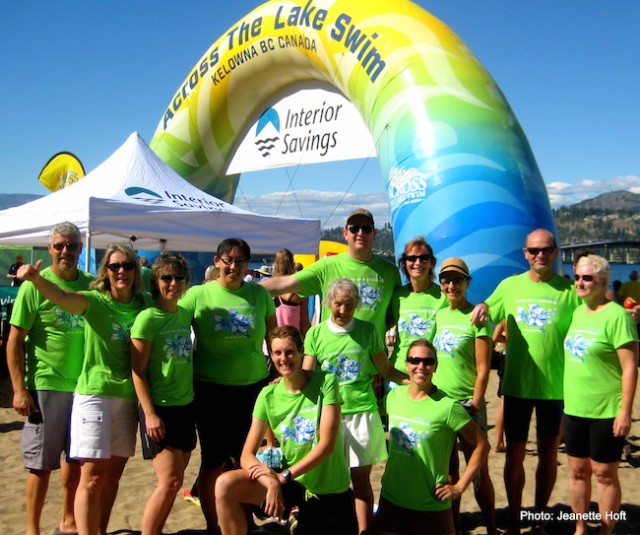 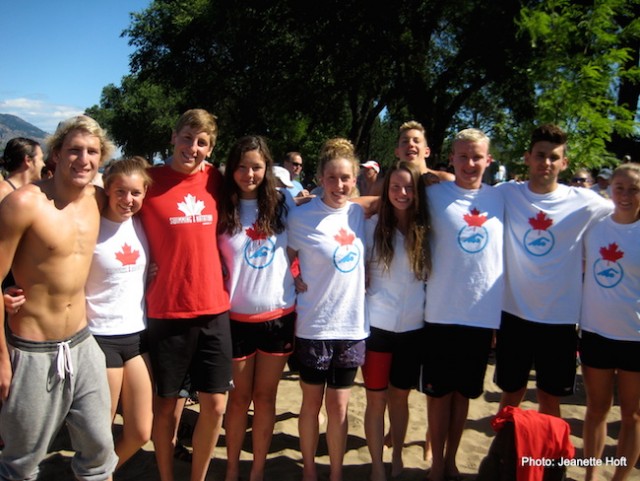 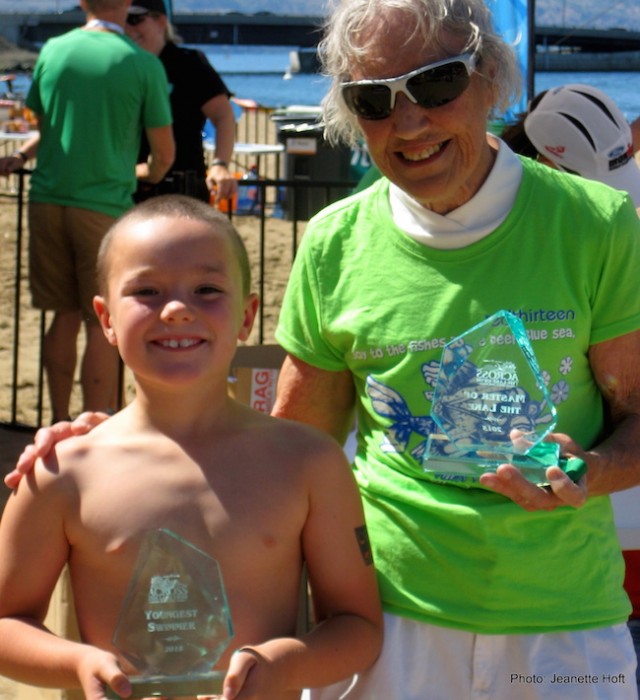 Photo: Contributed - Jeanette Hoft
The youngest and the oldest swimmer in 2015. Conny Stamhuis was 83 years old at the time of the swim. 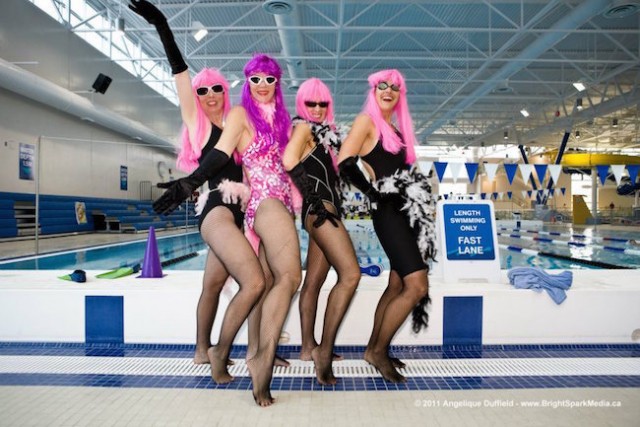 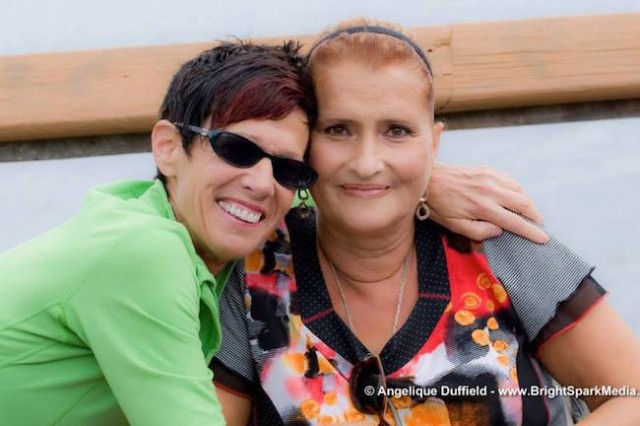 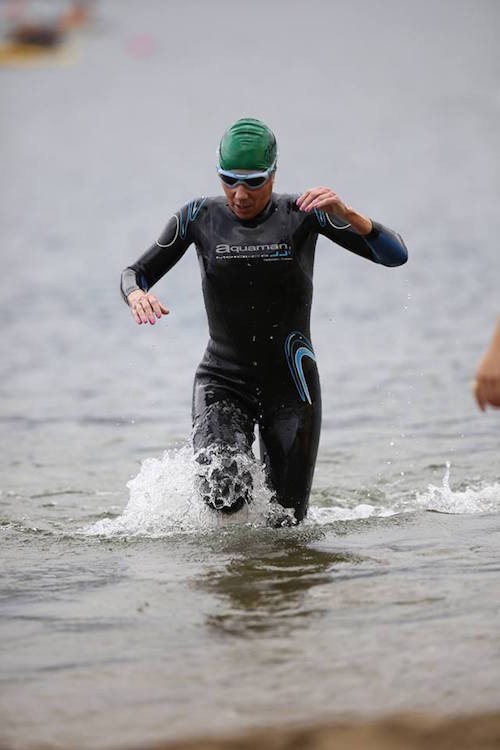 My swimming has made for many wonderful friendships and memories, and I will always attribute ATLS for igniting the passion for open water swimming.

I swim year-round, and train with the Okanagan Masters Swim Club in Kelowna. We have over 100 members, and an outstanding coaching team. Other clubs, such as the Kelowna Triathlon Club, Westside Thunder Masters, Wine Country Masters, H20, and the Rutland Family Y, all offer great swim programs for people to train for swimming and triathlon in Kelowna. We are so lucky to live in Kelowna.

I love the pure excitement of all the participants at the Across the Lake Swim, and the incredibly happy and positive mood that surrounds the entire event. It has been a transformational experience for many swimmers in conquering their fear of open water and achieving a long time goal to swim across our beautiful lake. Seeing the expressions of victory and delight on swimmers’ faces when they reach the big bright yellow arch at Hot Sands Beach is heartwarming.

By the time most brand new swimmers have completed their first event, they are ready to sign up for the next year. The ages of swimmers range from seven years old to people in their late 80’s. Inspiring, and impressive!

I have volunteered for many years at the ATLS Open Water Swim Clinics at Gyro Beach. These swim clinics have been extremely popular, and have helped hundreds of swimmers and non-swimmers to improve their open water swim techniques, and conquer their fears of open water. The thought of swimming 2k (in open water) when you are a non-swimmer or brand new swimmer is an unbelievably daunting prospect. Helping those swimmers, and watching the progress and confidence during the six week swim clinic program is nothing short of phenomenal. They are determined to succeed, and so they do.

It’s the volunteers who make ATLS such an exciting, safe and family friendly event, though. The behind-the-scenes work requires an enormous amount of time (nearly year round), and all the volunteers do their jobs with great dedication and enthusiasm.

A story about my crazy life as a swimmer is not complete without a mention of my OMSC swim coach Eli Dimitrov, who passed away from cancer in 2012. I organize a Memorial Swim every September in her honour. Eli was very special to me, our club, and all who knew her.

Then there’s Grant. He is the best husband ever, he has paddled for many of my longer lake swim events and was my spotter for the Georgia Strait, Bay Challenge, and Fruit Swims. I couldn't do these events without him.

Swimming is such a big part of my life, I am 100% at home when in the water. Every time I see a lake, river, creek or ocean, I want to jump right in and swim across it. Open water swimming has taught me how to challenge myself physically and mentally, and it has helped me to achieve many other goals in my life.

If the Across the Lake Swim is on your bucket list, please join us on July 16th. Be a little crazy. It’s fun! 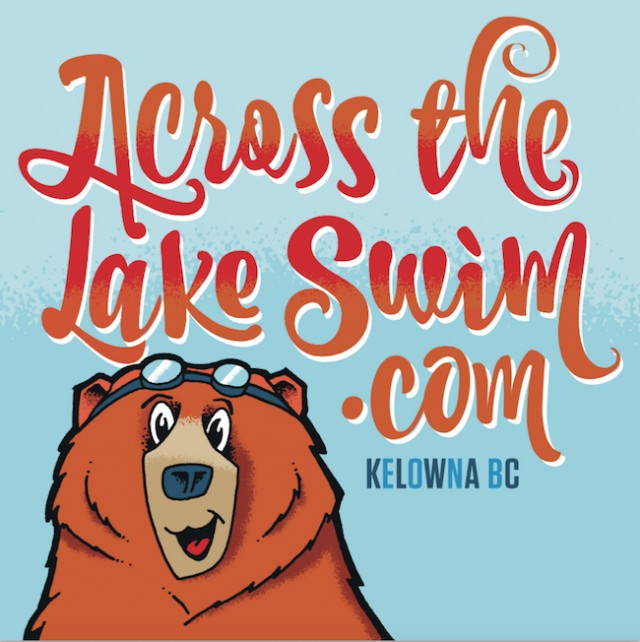