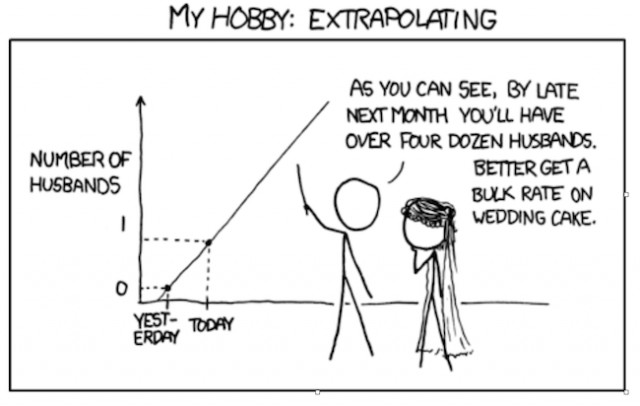 Today's guest writer is Dr. Greg Bolcer, a security, Web, and social networking expert, and a sometimes entrepreneur who likes movie quotes. He is a snarky know-it-all, with famous friends in high places.

If software is eating the world, then big data and infomania is driving us insane.

You can't swing a dead cat around your head nowadays without hitting at least half a dozen analytics projects that are trying to predict everything from the clickbait habits of casual Facebook friends to figuring out which convenience store is most likely to get held up and on what day.

In fact, there are bold predictions that eventually, with enough private data, computer models will know us better than we know ourselves, simply by generating a prediction matrix of our brains by generating every thought we can possibly have in the next 10 years.

Which brings us to where we are today, with big data scientists who think they can predict the future. Ten years ago, we would lock them up in an insane asylum. Five years ago, you'd find them wandering around drunk and penniless on the Las Vegas strip.

Now? They are the most highly-paid people on any political campaign. Add that there's more money in the political races this year than in almost all the previous US presidential races combined, you can extrapolate one thing: There's going to be a lot of predictions.

You have to understand three things about data scientists

Second, they love anything that helps them work with big data. This means they love computer stuff, like 13 Terabyte SSDs, and 128GB 3000Mhz DRAM, or even single Alphanumeric programming languages.

The third thing they love is the unholy quadumvirate of lies, damn-lies, statistics, and software analytics. In the world of big data, there is something called the ‘wisdom of crowds’. If you've ever worked in an office and tagged along with a crowd of your co-workers trying to figure out where to go to lunch, you probably question the ‘wisdom of crowds’.

A prediction market is just some Vegas-style online betting parlour where you can buy and sell commodities that are based on how many people think something is likely to happen.

In these type of markets, the more people who predict something that is going to happen, the more valuable the virtual commodity is. The value keeps going up until it gets really close to the Superbowl game or election night, then the bottom falls out and the virtual commodity is worth butkus, nada, or less than zero. As my favorite historical general liked to say, "If everyone is thinking alike, nobody is thinking."

After tinkering around with the wisdom

The problem is, when all the data scientists agree, the results aren't that interesting. They become something more like obvious truths.

When you get one data scientist with the facts on their side, you either have a true visionary or a bad model. Models are things mathematicians use to beat people up.

If you have a unique model that shows something interesting, then you earn your stripes as a data scientist, but only if your prediction comes true.

There are dozens of periodicals that try to fake it. If you've ever walked out of a Superbowl 10 seconds after the game ends, you'll see thousands of t-shirts that say 2016 Superbowl Champions <

Your immediate question is, how did they get those printed so fast?

The answer: They printed t-shirts for both teams, and charge enough to cover for both.

Which brings us to data science

If the data is on your side and you have a solid model with good assumptions, there's no guarantee anyone will listen to you. In fact, they'll likely use their own data scientists to discount your data.

One of the best recent example of this is in the movie The Big Short. Meet Michael Burry. He successfully predicted the housing crisis in the US. Unfortunately he did it years before anyone else thought there was a problem, so he had to walk through hell with a gas can every day for two years before people realized he was a true visionary.

Another example is Nate Silver. Nate was, and is, a statistician of the most famous type. He basically invented Moneyball for politics, and was right more often than anyone else. If you don't remember Moneyball, it involved Sabremetrics--a method of using data and statistics to figure out how to accomplish what was needed to win a baseball pennant without spending a fortune on player salaries like those damn Yankees.

Before Moneyball, there was The Cowboys and the Indian in which ex-IBM statistician A. Salam Qureishi figured out that you could use statistics to recruit incoming players better than the recruiters could. He was pretty good at it. The Cowboys went on to create a football dynasty that lasted for decades, based on his models.

This brings us to the most successful model of all

The US has fought two gulf wars. According to urban legend, the decision to go to war in Iraq was able to be predicted by an increase in pizza orders around government/military organizations.

To cite a previous historical example, on January 15, 1991, Frank Meeks, owner of several Domino's Pizza locations in Washington, D.C., told the Chicago Tribune that a sharp rise in the volume of pizza deliveries in the nation's capital suggested military action was imminent in the Persian Gulf.

Operation Desert Storm was launched the next day. Domino's insisted this was not a fluke. "Whenever something happens in this country, we know first," boasted Meeks. “You can question the accuracy, but orders went up before the Panama invasion, before the Grenada invasion. On the night before George Bush said 'read my lips, no new taxes' he said, ‘read my lips, more pepperoni’."

Over the years, the pizza index has shattered records. It has become conventional wisdom that the more the US Capital is in panic about one crisis or another, the more pizza is delivered. This model had proven true time and time again, through impeachment hearings, government shutdowns, war operations, you name it.

Yesterday, the US presidential race had the Iowa Caucuses. The Iowa caucus is the first semi-official primary vote to help figure out who should stay in the race and who should get out. In sort of a weird, political Munchausen syndrome way, these candidates try to convince Americans how horrible their lives are, and only they, with the full power and influence of the government, can fix it. If that doesn't work, they'll try to scare us even more.

According to my model, the correlation is highly significant, which led me to my four predictions below. Before I get to them, I'd like to offer this simple test:

Which statement is true?

If you were smart enough to figure out that there are four answers, congrats, you are on your way to becoming a data scientist. It’s one, the other, both or neither.

If you figured out that a stopped clock can be right twice a day, but there are infinite ways for a clock to be broken, including having your hamster chew the hands off the face, then congratulations, you are in the rarefied air of being on the right track to becoming a very good and highly paid political consultant.

The right answer is a stopped clock, but unlikely to be a broken clock, though there is a small chance it might be as well - that’s what statisticians like to call an escape hatch. A statistical escape hatch lets data scientists explain why they were wrong when things didn't work out the way they predicted.

So without further ado, I'd like to present my 100% guaranteed prediction:

•    Both Trump and Hillary Win

•    Neither Trump nor Hillary Win

That was my prediction, and I'm sticking to it. After all, dozens upon dozens of Chinese food deliveries can't be wrong, can they?