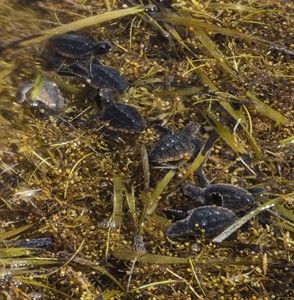 Photo: The Canadian Press. All rights reserved.
Sea turtles hatchlings swim in the sargassum after they were released by officials from Coast Guard and the Gumbo Limbo Nature Center in the Atlantic Ocean off the coast of Boca Raton, Fla., Thursday, Sept. 5, 2013. The crew released almost 500 sea turtle hatchlings. (AP Photo/Palm Beach Post, Greg Lovett) MAGS OUT; TV OUT; NO SALES

More than 500 sea turtle hatchlings were gently released by hand Thursday onto sea beds off Florida's Atlantic Coast, where the turtles have a better chance to survive.

The U.S. Coast Guard assisted with the release about 10 kilometres off the coast of Boca Raton because it is committed to protecting endangered and threatened species, officials said in a statement.

Schider-Heisel, who volunteers at the Gumbo Limbo Nature Center, where the hatchlings were collected, joined marine scientist Melanie Stadler and other turtle rescue volunteers to release 311 loggerhead and 194 green sea turtles.

One by one, the turtles were slowly placed in the water and onto beds of seaweed where "they have more hope to survive," said Schider-Heisel, who described the sea beds as a La-Z-Boy for the baby turtles, or a safe and comfortable place for them to be released.

The hatchlings, some as young as two days old, came from turtle nests from beaches throughout Florida where the loggerhead, leatherback and green turtles nest regularly. Two other species also nest in Florida in very small numbers, the Kemp's ridley and hawksbill.

The loggerhead is threatened and the green and leatherback are endangered, but all sea turtles are federally protected. It is against the law to touch or disturb nesting sea turtles, hatchlings or their nests. Signs are posted on beaches during nesting season, as adult females emerge to nest on the beach mostly at night. The hatchlings also emerge from their nests mostly at night. Only about one in 1,000 baby turtles survive to adulthood.

"A lot of these I literally pulled out of a nest," said Stadler as she held a baby turtle in her hand to show a Coast Guard crew member. "I have a connection with a lot of them, as do the rest of the turtle specialists. We all rescue these little guys every morning and knowing that we get to release them and they are healthy and ready to go is pretty awesome."

Stadler said the coast guard's assistance with transporting so many baby sea turtles at once was "crucial" for their survival.