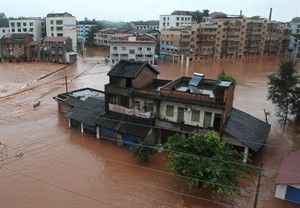 The heaviest rain to hit Beijing in six decades killed at least 10 people and left cars and buses submerged, and 10 other storm deaths were reported elsewhere as China braced Sunday for more downpours.

The rain Saturday night knocked down trees in Beijing and trapped cars and buses in waist-deep water in some areas.

In Tongzhou district on the capital's eastern outskirts, two people were killed by collapsed roofs, one person was fatally struck by lightning and a fourth was electrocuted by a fallen power line as he helped neighbours escape, the government's Xinhua News Agency said.

One man in Beijing died when his car was trapped in deep water near the city centre, the newspaper Beijing News said.

Elsewhere, six people were killed by rain-triggered landslides in Sichuan province in the west, Xinhua said, citing disaster officials. Four people died in Shanxi province in the north when their truck was swept away by a rain-swollen river.

On Sunday, the government warned of more storms over the following 24 hours for China's northeast, the port city of Tianjin east of Beijing, Inner Mongolia in the north, Sichuan and neighbouring Yunnan province, and Guangdong and Hainan provinces in the southeast.

China suffers flooding and dozens of storm-related deaths every summer rainy season, but such a heavy downpour in relatively dry Beijing is unusual.

A flash flood in Fangshan stranded 104 primary school students and nine teachers at a military training site, Xinhua said. It said they were in no immediate danger and that rescuers had taken food to them.

At the Beijing airport, 229 domestic and 14 international flights were cancelled and more were delayed, the airport authority announced. The Beijing News said some 80,000 travellers were stranded at the airport as of 11:30 p.m. on Saturday.

Some 14,500 people were evacuated Saturday from parts of Beijing, Xinhua said. The Beijing News said they included 5,200 people who left areas in Fangshan that were vulnerable to landslides.