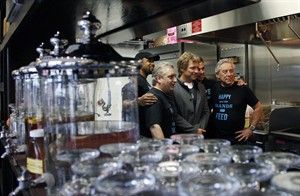 Yet there's no place he'd rather have dinner than The Soul Kitchen, a "pay-what-you-can" restaurant he and his wife Dorothea established in a former auto body shop near the Red Bank train station in central New Jersey.

The restaurant provides gourmet-quality meals to the hungry while enabling them to volunteer on community projects in return without the stigma of visiting a soup kitchen. Paying customers are encouraged to leave whatever they want in the envelopes on each table, where the menus never list a price.

The restaurant is the latest undertaking by the New Jersey rocker's Jon Bon Jovi Soul Foundation, which has built 260 homes for low-income residents in recent years.

"With the economic downturn, one of the things I noticed was that disposable income was one of the first things that went," Bon Jovi told The Associated Press in an interview Wednesday before the restaurant's grand opening ceremony. "Dining out, the family going out to a restaurant, mom not having to cook, dad not having to clean up, a lot of memories were made around restaurant tables.

"When I learned that one in six people in this country goes to bed hungry, I thought this was the next phase of the Foundation's work," he said.

It started several years ago when Dorothea Bongiovi (she uses the legal spelling of her husband's name) and Jon started helping out at a food pantry at nearby St. Anthony's Roman Catholic Church. They later moved their focus to the Lunch Break program, which feeds 80 to 120 people a day, dubbing it "The Soul Kitchen."

They brought that name with them to a former auto body shop down the street from the Count Basie Theater, where Jon and his self-titled band have played many fundraising shows for local charities.

It took a year and $250,000, but the restaurant now rivals any of its competitors in trendy Red Bank, with entrees like cornmeal crusted catfish with red beans and rice, grilled chicken breast with homemade basil mayo and rice pilaf, and grilled salmon with soul seasonings, sweet potato mash and sauteed greens, many of which were grown in the herb and vegetable garden right outside the restaurant's doors.

Bon Jovi, who has a home in next-door Middletown, is adamant about one thing.

"This is not a soup kitchen," he emphasizes. "You can come here with the dignity of linens and silver, and you're served a healthy, nutritious meal. This is not burgers and fries.

"There's no prices on our menu, so if you want to come and you want to make a difference, leave a $20 in the envelope on the table. If you can't afford to eat, you can bus tables, you can wait tables, you can work in the kitchen as a dishwasher or sous chef," he said. "If you say to me, 'I'm not a people person,' I say, 'That's not a problem. We'll take you back to Lunch Break to volunteer with those people. If you don't want to volunteer with that, we'll take you to the FoodBank."

After volunteering at one of those places, a person will be given a certificate good for a meal at The Soul Kitchen.

"If you come in and say, 'I'm hungry,' we'll feed you," Bon Jovi said. "But we're going to need you to do something. It's very important to what we're trying to achieve."

That includes making people feel part of a larger community that cares about them, while still expecting them to contribute to society at large.

"This is not an entitlement thing," Bon Jovi said. "This is about empowering people because you have to earn that gift certificate."

Bon Jovi said he is currently writing songs for his band's next album, due out in 2013, along with another typically massive Bon Jovi tour. He said many of the songs are inspired by the current economic downturn and the struggles of everyday people to make ends meet without losing hope.

In the meantime, he and his wife plan to stay active in the restaurant, where he estimates he has worked at least once a week in recent months. The Soul Kitchen is open for dinner Thursday through Saturday, and offers Sunday brunch.

How important is rolling up his sleeves and working in the restaurant to him?

"Last Friday, I was at the White House, serving on the Council for Community Solutions, got on a train, changed in the bathroom and got here in time to wash dishes Friday night," he said. "I'm the dishwasher, for real. I can't cook a lick."

Wayne Parry can be reached at http://twitter.com/WayneParryAC