US will leave Iraq at year-end 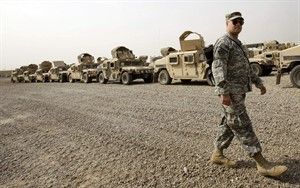 Photo: The Canadian Press. All rights reserved.
A U.S. army soldier walks past military Humvees which are ready to be shipped out of Iraq at a staging yard at Camp Sather, part of the sprawling U.S. military Victory Base Complex that is set to close in Baghdad, Iraq. (AP Photo/Khalid Mohammed)

The U.S. is abandoning plans to keep U.S. troops in Iraq past a year-end withdrawal deadline, The Associated Press has learned.

The decision to pull out fully by January will effectively end more than eight years of U.S. involvement in the Iraq war, despite ongoing concerns about its security forces and the potential for instability.

The decision ends months of hand-wringing by U.S. officials over whether to stick to a Dec. 31 withdrawal deadline that was set in 2008 or negotiate a new security agreement to ensure that gains made and more than 4,400 American military lives lost since March 2003 do not go to waste.

But a senior Obama administration official in Washington confirmed Saturday that all American troops will leave Iraq except for about 160 active-duty soldiers attached to the U.S. Embassy.

A senior U.S. military official confirmed the departure and said the withdrawal could allow future but limited U.S. military training missions in Iraq if requested.

Both officials spoke on condition of anonymity because of the sensitivity of the issue.

Throughout the discussions, Iraqi leaders have adamantly refused to give U.S. troops immunity from prosecution in Iraqi courts, and the Americans have refused to stay without it. Iraq's leadership has been split on whether it wanted American forces to stay.

Some argued the further training and U.S. help was vital, particularly to protect Iraq's airspace and gather security intelligence. But others have deeply opposed any American troop presence, including Shiite militiamen who have threatened attacks on any American forces who remain.

A western diplomatic official in Iraq said al-Maliki told international diplomats he will not bring the immunity issue to parliament because lawmakers will not approve it.

Iraqi lawmakers excel at last-minute agreements. But with little wiggle room on the immunity issue and the U.S. military needing to move equipment out as soon as possible, a last-minute change between now and December 31 seems almost out of the question.

Regardless of whether U.S. troops are here or not, there will be a massive American diplomatic presence.

The U.S. Embassy in Baghdad is the largest in the world, and the State Department will have offices in Basra, Irbil and Kirkuk as well as other locations around the country where contractors will train Iraqi forces on U.S. military equipment they're purchasing.

About 5,000 security contractors and personnel will be tasked with helping protect American diplomats and facilities around the country, the State Department has said.

The U.S. Embassy will still have a handful of U.S. Marines for protection and 157 U.S. military personnel in charge of facilitating weapons sales to Iraq. Those are standard functions at most American embassies around the world and would be considered part of the regular embassy staff.

When the 2008 agreement requiring all U.S. forces leave Iraq was passed, many U.S. officials assumed it would inevitably be renegotiated so that American forces could stay longer.

Lara Jakes can be reached at http://twitter.com/@larajakesAP

Rebecca Santana can be reached at http://twitter.com/ruskygal