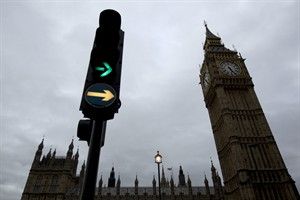 Big Ben has a little bend.

Experts say the neogothic clock tower one of the world's most recognizable landmarks is gently leaning to one side. Documents recently published by Britain's Parliament show that the top of its gilded spire is nearly 18 inches (nearly half a meter) out of line.

The 315-foot (96-meter) tower is leaning in the northwest direction at an angle of 0.26 degrees, according to a report from 2009 that was recently obtained by the Sunday Telegraph through a Freedom of Information request.

But there's no cause for alarm, experts said. It would take thousands of years before the London landmark's tilt matches that of the Leaning Tower of Pisa.

The clock tower  colloquially known as Big Ben after its massive bell has been slightly off centre since it was erected in the mid-19th century. Like many old buildings, its position has been shifting imperceptibly for years due to environmental factors such as seasonal temperature and moisture level changes.

"We're talking about unbelievably small movements," said John Burland, an engineering professor at Imperial College London who has been involved in the study on the tower.

"At the present rate, it will be 10,000 years before we reach that," he added, referring to comparisons with the tower in Pisa, Italy.

Even so, the tilt might now be just about visible to the naked eye.

"Anyone who stands there and looks may say 'I don't think it's vertical,' and they are quite right," he said.

The level of movement northward has been less than 1 millimeter a year since experts began measuring it in the 1970s, Burland said. In the 1990s, the construction of a London Underground line affected the clock tower's foundations and added a small amount of movement to that natural shift, he said.

But most of the tilt took place during the first years when the tower was being built, likely due to nonuniform ground conditions, Burland said.

According to Parliament's website, foundations for the clock tower were first laid in 1843 and the project was completed in 1859, several years behind schedule.

Mike McCann, who's charged with looking after the tower's clockwork, shrugged off the problem, saying that such imperfections were a fact of life for older buildings.

"The Victorians didn't have lasers or modern surveying equipment," said McCann, whose official title is Keeper of the Great Clock. "It was never going to be straight to start with."

McCann said Big Ben's lean was "very, very minor," although he acknowledged that an eagle-eyed visitor might still be able to spot it.

"You'd have to be standing on absolutely flat ground, with your head completely straight," he said. "That's very difficult."

Reports into the leaning of Big Ben clock tower 2011: http://bit.ly/qaSumB