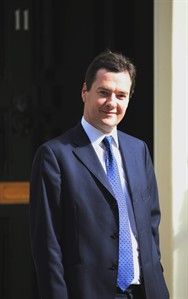 A dominatrix's sensational story of sex, cocaine, and tabloid wrongdoing has revived questions over the relationship between Rupert Murdoch's scandal-hungry News of the World and Britain's Treasury chief, George Osborne.

Former escort boss Natalie Rowe, in a television interview being aired later Monday, says the tabloid deliberately twisted her claims that she and the Conservative Party politician used to snort cocaine together years ago so that Osborne was not tainted in the scandal.

The idea that Osborne now one of the country's most powerful politicians could have been deliberately cast in a sympathetic light by a Murdoch paper have raised new questions about whether the now-defunct tabloid was playing favourites with its political exposes.

It also highlights the cozy ties between British politicians and the Murdoch press that Prime Minister David Cameron has vowed to cut. Osborne was the key Conservative to recommend that Murdoch executive Andy Coulson, a former News of the World editor, become Cameron's top communications aide.

The story begins with Rowe's 2005 claim that she and Osborne used to snort cocaine together years ago. At the time, it was exactly the kind of story the brash News of the World loved a mix of sex, politics and drugs and even came with a picture of the youthful pair that the tabloid said showed them arm-in-arm with a white substance in front of them.

But while the News of the World trumpeted the story across its front page, it took an unusually forgiving approach to Osborne, who at the time was managing Cameron's bid to become leader of the British Conservatives.

Rowe now claims that News of the World reporters stole her story, which she was hoping to sell to a rival newspaper, and deliberately twisted the facts to make Osborne look better.

In an interview with Australian Broadcasting Corp. television, she accused the Murdoch tabloid of making her seem unreliable so as to undermine allegations against a man who now holds one of the most senior positions in the British government.

"They stole the story and then they didn't even tell it as it should have been told," Rowe said, according to a transcript of the interview due to be aired later Monday. "They completely diluted it and made it look like I was not to be trusted .... and all for George Osborne."

Rowe's claims that she, Osborne and his well-heeled friends indulged in cocaine together parties are long-standing and have been repeatedly denied by the 40-year-old Osborne.

In her interview, Rowe claims that she was hoping to publish her allegations in the Sunday Mirror, which put out a story entitled "I snorted cocaine with top Tory boy" on October 16, 2005.

But the News of the World under circumstances which remain unclear got a hold of the story at the same time, running it under a less explicit headline: "Top Tory, coke and the hooker"

David Stringer in Moscow contributed to this report.