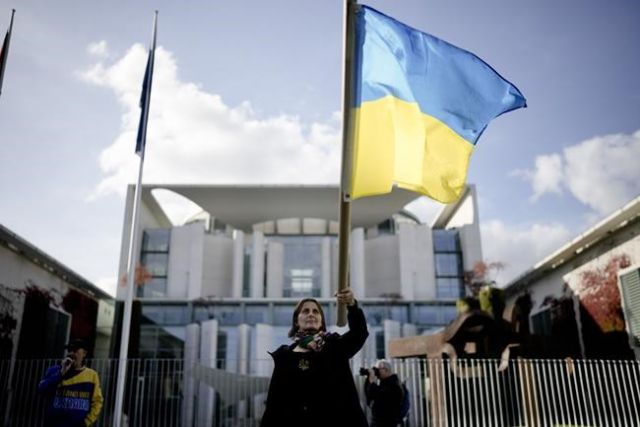 Air raid warnings extended throughout the country for a second straight morning as Ukrainian officials advised residents to conserve energy and stock up on water. Strikes in the capital and 12 other regions Monday caused widespread power outages and pierced the relative calm that had returned to Kyiv and many other cities far from the war's front lines.

“It brings anger, not fear,” Kyiv resident Volodymyr Vasylenko, 67, said as crews worked to restore traffic lights and clear debris from the city's streets. “We already got used to this. And we will keep fighting.”

Ukrainian President Volodymyr Zelenskyy addressed the leaders of the Group of Seven industrial powers by videoconference Tuesday. After the meeting, the G-7 leaders condemned this week's blitz and said their countries “will stand firmly with Ukraine for as long as it takes.”

Russia launched the widespread attacks in retaliation for a weekend explosion that damaged a bridge linking the country to the Crimean Peninsula, which Moscow annexed from Ukraine in 2014. Russian President Vladimir Putin alleged the Ukrainian special services masterminded the Saturday attack on the Kerch Bridge.

Russia has has concentrated most of its firepower during the 7 1/2-month war in eastern and southern Ukraine, and Ukrainian officials said the previous day's diffuse strikes on power plants and civilian areas made no “practical military sense.”

However, Putin’s supporters had urged the Kremlin for weeks to take more drastic steps in Ukraine and actively criticized the Russian military for a series of embarrassing battlefield setbacks. Pro-Kremlin pundits lauded Monday’s attack as an appropriate and long-awaited response to Kyiv’s recently successful counteroffensives, and many of them argued that Moscow should keep up the intensity in order to win the war.

The bombardment Tuesday struck both energy infrastructure and civilian areas, just as Monday's attacks did. One person was killed when 12 missiles slammed into public facilities in the southern city of Zaporizhzhia, setting off a large fire, the State Emergency Service said. A local official said the missiles hit a school, residential buildings and medical facilities.

Energy facilities in the western Lviv and Vinnitsya regions also took hits. Although officials said Ukrainian forces shot down an inbound Russian missile before it reached Kyiv, the capital region experienced rolling power outages as a result of the previous day's deadly strikes.

The governor of the Mykolaiv region, Vitaliy Kim, urged residents to remain in bomb shelters as “there are enough missiles still in the air.”

The State Emergency Service said 19 people died and 105 people were wounded in Monday’s strikes. At least five of the victims were in Kyiv, Mayor Vitali Klitschko said. More than 300 cities and towns lost power, from the capital to Lviv on the border with Poland.

Beside the usual sirens, a new type of loud alarm that blared automatically from mobile phones jolted Kyiv residents early Tuesday. A text message warning of the possibility of missile strikes accompanied the caustic-sounding alert.

A spokesperson for the office of the U.N. High Commissioner for Human Rights said Tuesday that strikes on “civilian objects,” including infrastructure such as power plants, could qualify as a war crime.

“Damage to key power stations and lines ahead of the upcoming winter raises further concerns for the protection of civilians and in particular the impact on vulnerable populations,” Ravina Shamdasani told reporters at a U.N. briefing in Geneva. “Attacks targeting civilians and objects indispensable to the survival of civilians are prohibited under international humanitarian law.”

Ukrainian President Volodymyr Zelenskyy was due to address the leaders of the Group of Seven industrial powers by videoconference Tuesday. Germany, which currently chairs the G-7, announced the meeting after Monday's missile strikes.

As Ukrainian forces grew increasingly bold following a series of counteroffensive successes, a cornered Kremlin ratcheted up Cold War-era rhetoric in the last month and fanned concerns it might broaden the war and use nuclear weapons in Ukraine.

Russian Foreign Minister Sergey Lavrov addressed the issue Tuesday, saying Moscow would only resort to that if the Russian state faced imminent destruction. Speaking on state TV, he accused the West of encouraging false speculation about the Kremlin's intentions.

Russia’s nuclear doctrine envisages “exclusively retaliatory measures intended to prevent the destruction of the Russian Federation as a result of direct nuclear strikes or the use of other weapons that raise the threat for the very existence of the Russian state,” Lavrov said.

In Brussels, NATO Secretary-General Jens Stoltenberg said the 30-nation military alliance would hold long-planned exercises next week to test the state of readiness of its nuclear capabilities.

The exercise, dubbed “Steadfast Noon,” is held annually. It involves fighter jets capable of carrying nuclear warheads but does not any live bombs. Conventional jets, and surveillance and refueling aircraft routinely take part.

Asked whether it was the wrong time for such an exercise, Stoltenberg replied: “It would send a very wrong signal now, if we suddenly cancelled a routine, long-time planned exercise because of the war in Ukraine.”

Stoltenberg said Russian President Vladimir Putin’s nuclear rhetoric over the war in Ukraine is “irresponsible,” and he said that “Russia knows that a nuclear war can never be won and must never be fought.”

NATO as an organization does not possess any nuclear weapons. They remain under the control of three member countries – the U.S., U.K. and France.

Asked during a conference call with reporters about Washington's intention to provide Ukraine with advanced air defense systems, Peskov said the move would “only drag the conflict out and make it more painful” for Ukraine without changing Russian goals.