Gates too small for escape 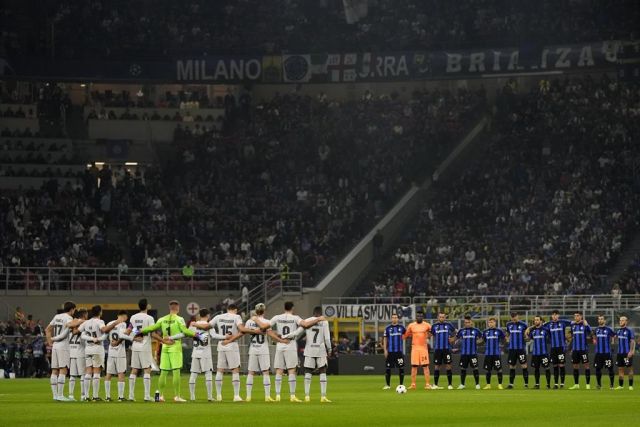 MALANG, Indonesia (AP) — Delays in unlocking the gates at an Indonesian soccer stadium after violence broke out at the end of a match contributed to a disaster in which at least 131 people died, the national soccer association said Tuesday.

The Football Association of Indonesia said it has permanently banned the chief executive and security coordinator of the team that hosted Saturday's match, Arema FC, for failing to secure the field and promptly issue a command to unlock the gates.

“The doors should have been open, but were closed," said Erwin Tobing, chief of the association's discipline commission.

Because of a lack of workers, only a few people were ordered to open the gates, and they had not yet reached some doors when spectators began rushing to escape tear gas fired by police in an attempt to control fans who had entered the field, association spokesperson Ahmad Riyadh said.

He said all gates should be unlocked 10 minutes before the end of a match. But on Saturday, 7 minutes after the referee blew the final whistle, several doors were still locked, contributing to the toll in one of the world's deadliest sporting disasters.

Police, however, continued to insist Tuesday that the gates were open but were too narrow and could only accommodate two people at a time when hundreds were trying to escape.

According to recommendations by FIFA and the Asian Football Confederation, exits at stadiums must be unlocked at all times during a game for safety purposes. Those rules don’t necessarily apply to domestic or national leagues but nevertheless are a safety standard, as is the recommendation against the use of tear gas as a crowd-control measure.

Photos from the Malang stadium showed four connecting door panels forming one gate. There were 14 gates in total.

Police said their investigation focused on video recordings from surveillance cameras at six of the 14 gates where most of the victims died.

“For those six gates, they were not closed but they were too small. They had a capacity for two people but there were hundreds coming out. There was a crush there,” police spokesperson Dedi Prasetyo told reporters. He added that the gates were the responsibility of the organizers.

Most of the deaths occurred when riot police fired tear gas and caused fans to make a panicked, chaotic run for the exits. Police acted after some of the 42,000 Arema fans ran onto the pitch in anger after their team was defeated 3-2, its first loss at home against visiting Persebaya Surabaya in 23 years.

On Monday, police announced they had removed a police chief and nine elite officers, and 18 others were being investigated for responsibility in the firing of tear gas inside the stadium.

Some survivors said some of the exit gates were locked and they were unable to escape. Most of them specifically mentioned Gate 13.

“People tried to save themselves after tear gas was fired. My group was separated from each other," said Prasetyo Pujiono, a 32-year-old farmer from Malang who watched the match with friends near Gate 13.

“People could not stay anymore inside the stadium. We wanted to escape but the gate was closed. That is why most people died as they were trampled or suffocated," he said. “I remember they were screaming that they cannot breathe and their eyes hurt."

Those trying to escape finally broke through the wall next to Gate 13, leaving behind a big hole with scrawled graffiti that read: “Goodbye my brothers and sisters. 01-10-2022.”

Hundreds of Arema supporters and local residents have been paying tribute to the victims at Gates 13 and 12 since Monday. They prayed together, dropped rose petals, flower bouquets and placed several Arema scarves around the gates.

Pujianto said he moved more than 20 bodies that lay scattered around Gate 13.

“Poor them. So many bodies were scattered at Gate 13. We could not have gotten out if we had not moved them. So my friends and I carried them to the field,” he said.

Evita Triawardani, a 26-year-old Arema supporter, said that in every match she had attended, the organizers usually opened the gates 15 to 20 minutes before the game ended. But that Saturday night, she said Gate 13 was closed. She saved herself by running out of the stadium through Gate 14, which she said was open.

She said she saw people crying and gasping for air in clouds of tear gas, and parents holding their children above their shoulders so they could breathe. At least 17 children were among the dead.

The Football Association of Indonesia announced it has banned Arema from hosting any matches attended by its supporters in Malang until next year as a result of Saturday's disaster.

Tobing said Arema’s chief executive, Abdul Harris, and the coordinator of security, Suko Sutrisno, have been banned from participating in soccer for life because they had not secured the field and delayed the opening of the gates.