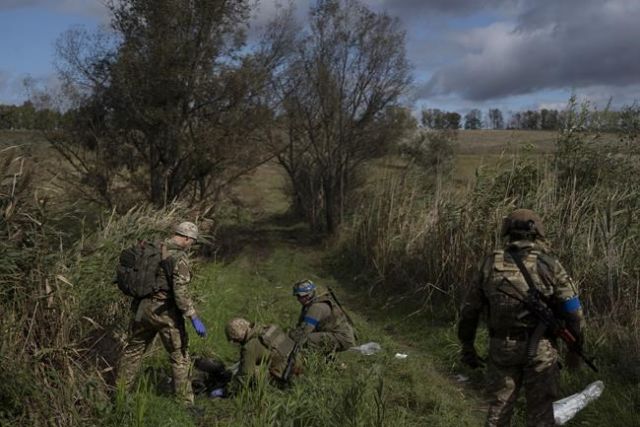 Photo: The Canadian Press
Ukrainian national guard servicemen near the border with Russia, in the Kharkiv of Ukraine.

The separatist leaders of four Russian-controlled areas of Ukraine said Tuesday they were planning to hold votes starting later this week for the territories to become part of Russia as Moscow loses ground in the war it launched.

The four regions are Donetsk, Kherson, Luhansk and Zaporizhzhia. The announcements of referendums starting Friday came after a close ally of Russian President Vladimir Putin said they were needed.

Former Russian President Dmitry Medvedev also said that folding Luhansk and Donetsk in eastern Ukraine into Russia itself would make their redrawn frontiers “irreversible” and enable Moscow to use “any means” to defend them.

Such votes would almost certainly go Moscow’s way, but not be recognized by Western governments. The votes could set the stage for Moscow to escalate the conflict as Ukrainian forces battle with growing success to take back territory.

Denis Pushilin, the head of the Donetsk region, said that the “long-suffering people of the Donbas have earned the right to be part of the great country that they always considered their motherland.” He added that the vote will help “restore historic justice that millions of the Russian people were waiting for.”

Meanwhile, the Kremlin said Tuesday there are no prospects for a negotiated end to the war in Ukraine and gave its blessing to efforts to swiftly bring regions already captured under Russia's complete control. Such a move could set the stage for Moscow to escalate the conflict if Ukrainian forces try to take the regions back.

Kremlin spokesman Dmitry Peskov said Tuesday that there are no prospects for a diplomatic settlement. Medvedev, the deputy head of Russia’s Security Council chaired by Putin, said on his messaging app channel that votes in separatist regions are important to protect their residents and “restore historic justice" and would "completely change" Russia's future trajectory.

“After they are held and the new territories are taken into Russia’s fold, a geopolitical transformation of the world will become irreversible," said Medvedev, who also served as Russia’s president from 2008-2012.

“An encroachment on the territory of Russia is a crime that would warrant any means of self-defense,” he said, adding that Russia would enshrine the new territories in its constitution so no future Russian leader could hand them back.

The recapturing of large areas of previously Russian-occupied territory, most notably in the northeastern Kharkiv region, has strengthened Ukraine's arguments that its troops could deliver more stinging defeats to Russia with additional armament deliveries.

More heavy weaponry is on its way, with Slovenia this week promising 28 tanks and Germany pledging four additional self-propelled howitzers. More aid also is expected from Britain, already one of Ukraine's biggest military backers after the United States. British Prime Minister Liz Truss is expected to promise that in 2023, her government will “match or exceed” the 2.3 billion pounds ($2.7 billion) in military aid given to Ukraine this year.

The swiftness of the Ukrainian counteroffensive also saw Russian forces abandon armored vehicles and other weapons as they beat hasty retreats. Ukrainian forces are recycling captured weaponry back into battle. A Washington-based think tank, The Institute for the Study of War, said Tuesday that abandoned Russian T-72 tanks are being used by Ukrainian forces seeking to push onward into Russian-occupied Luhansk.

In the counteroffensive's wake, Ukrainian officials found hundreds of graves near the once-occupied city of Izium. Yevhenii Yenin, a deputy minister in Ukraine’s Internal Affairs Ministry, told a national telecast that officials found many bodies “with signs of violent death."

“These are broken ribs and broken heads, men with bound hands, broken jaws and severed genitalia,” he said.

Ukrainian officials also have alleged Russian forces tortured people in occupied areas, including shocking them with radio telephones dating back to the Soviet era. Russia has repeatedly denied abusing or killing prisoners, though Ukrainian officials found mass graves around the city of Bucha after blunting a Russian offensive targeting the capital, Kyiv, at the start of the war.

Meanwhile, a Ukrainian push continues in the south of the country. Ukraine’s southern military command said early Tuesday its troops sank a Russian barge carrying troops and weapons across the Dnipro River near the Russian-occupied city of Nova Kakhovka. It offered no other details on the sinking of the barge in the Russian-occupied Kherson region, which has been a major target in the Ukrainian counteroffensive.