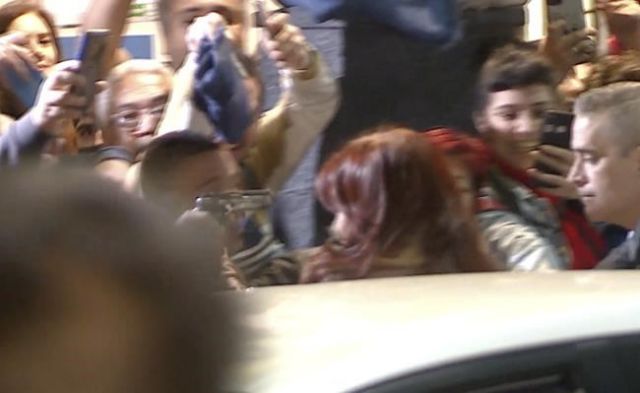 As Argentina’s powerful Vice President Cristina Fernández stepped from her car outside her apartment building and began shaking hands with a throng of a well-wishers, a man came forward with a gun, put it just inches from her face and pulled the trigger with a distinct click.

Fernández's security detail seized the gunman and took him away, and the 69-year-old former president of Argentina appeared unhurt. But the apparent assassination attempt against the deeply divisive figure Thursday night shook Argentina — a country with a history of political violence — and further roiled its tumultuous political scene.

The gunman was identified as Fernando André Sabag Montiel, a 35-year-old street vendor and Brazilian citizen who has lived in Argentina since 1998 and had no criminal record, authorities said. He was arrested on suspicion of attempted murder.

Authorities shed no light on a possible motive and were investigating whether he acted alone or was part of a larger plot.

“There is no confirmed hypothesis,” said a Security Ministry official who was not authorized to discuss the case publicly and spoke on condition of anonymity. “Everything is being investigated.”

The country's political leaders quickly condemned the incident, with President Alberto Fernández holding a late-night national broadcast to tell Argentines just how close the vice president came to being killed.

The president, who is not related to his vice president, said the man's semiautomatic handgun was loaded with five bullets but “didn’t fire even though the trigger was pulled.”

The president declared a national holiday Friday in the wake of what he called “the most serious incident since we recovered democracy” in 1983 after a military dictatorship.

Tens of thousands of people packed the streets surrounding Government House in downtown Buenos Aires in the afternoon to show their support for the vice president and denounce the incident.

Many demonstrators carried signs calling for peace and unity or expressing their love for Fernández. Chants against the political opposition could also be heard.

No politician awakens more passion in Argentina than Fernández, who has both fervent supporters and ardent detractors.

The left-of-center leader is on trial on corruption charges involving public works while she was president from 2007 to 2015. Some of her staunchest supporters had been gathering daily outside her apartment since Aug. 22, when a prosecutor called for a 12-year prison sentence for her and a ban on holding public office ever again. She has vehemently denied all charges and cast herself as a victim of political persecution.

“If you touch Cristina, what chaos we’ll make!" supporters had chanted.

In recent days, some of her allies charged that her detractors were trying to spark violence, with Security Minister Aníbal Fernández saying the opposition "is looking for someone to die on the street.”

Following Thursday's incident, some of her supporters pointed the finger at the opposition for what they said was hateful speech that could push people toward violence.

Before the apparent attempt on her life, Fernández had made a habit of leaving her apartment every day around noon, greeting supporters and signing autographs before getting in her vehicle to go to the Senate. She had a similar routine every evening.

Over the weekend, her supporters had clashed with police during an effort by law enforcement to clear the area, and the strong police presence around the apartment was then reduced, though her supporters kept coming.

In Thursday's incident, which was captured on video, it was not clear whether Fernández understood what had just happened. Video appeared to show her covering her face and ducking. But seen from another angle, it looked as she had dropped something and crouched to pick it up.

Even as her security detail went into action, Fernández continued greeting supporters in the upscale Recoleta neighborhood of Argentina’s capital.

Government officials and former leaders decried the episode as a threat against democracy and the rule of law.

“When hate and violence are imposed over the debate of ideas, societies are destroyed and generate situations like the one seen today: an assassination attempt,” Economy Minister Sergio Massa said.

“Instead of seriously investigating a serious incident, he accuses the opposition and the press, decreeing a national holiday to mobilize activists," she said.

Fernández has been at the center stage of Argentine political life for almost two decades, revered by some for her left-leaning social welfare policies and reviled by others as corrupt and power-hungry. She was the country's charismatic first lady during President Néstor Kirchner’s 2003-07 administration, then succeeded her husband.

As opposition to her rule began rising, Fernández increasingly portrayed herself as the victim of attacks from powerful special interests because of her defense of the poor and workers.

In one of the most dramatic incidents of her two-term presidency, a prosecutor who had accused Fernández of making a deal with Iran to cover up its alleged involvement in a 1994 bombing of a Jewish community center in Buenos Aires died shortly before he was set to present evidence against her in 2015.

Allies of the former president insist Alberto Nisman died by suicide. But the opposition has long contended that he was murdered or driven to kill himself.

“I lament it, and there are people already trying to blame me for that problem,” Bolsonaro said. “It is good that the attacker didn’t know how to use a gun, otherwise he would have been successful. ”