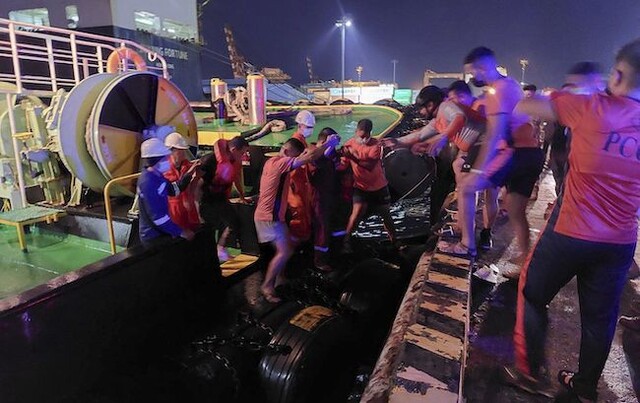 A Philippine ferry carrying 82 passengers and crew caught fire as it was approaching a port south of Manila on Friday and at least 73 of those aboard have been rescued, the coast guard said.

Search and rescue efforts were continuing after nightfall for the passengers and crew of the M/V Asia Philippines, an inter-island cargo and passenger vessel which came from nearby Calapan city in Oriental Mindoro province, the coast guard said.

A 44-year-old woman who was among those rescued was taken to a hospital with unspecified injuries.

Video released by the coast guard showed flames and black smoke billowing from the ferry, which was near other ships more than a kilometre from anchorage waters off Batangas port, coast guard officials said.

A ship was assisting two coast guard vessels in the rescue efforts, they said. The cause of the fire was not immediately clear.

The ferry can carry up to about 400 passengers, the coast guard said. There have been instances in the past of ferries carrying unlisted passengers in defiance of regulations.

Sea accidents are common in the Philippine archipelago because of frequent storms, badly maintained boats, overcrowding and spotty enforcement of safety regulations, especially in remote provinces.

In December 1987, the ferry Dona Paz sank after colliding with a fuel tanker, killing more than 4,300 people in the world’s worst peacetime maritime disaster.