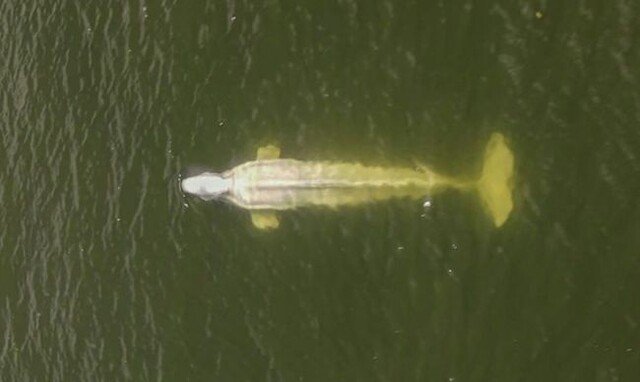 Efforts to feed a dangerously thin Beluga whale that has strayed into the Seine River in France have failed so far and experts are now trying to get the whale out of the river lock where it is stuck, environmentalists said Monday.

The marine conservation group Sea Shepherd France tweeted Monday that “feeding attempts are continuing in parallel to finding a solution to get it out of the lock in the best conditions.”

Experts at the site have warned that the beluga should not stay too long in the warm, stagnant water between lock gates.

“The beluga still doesn't eat but continues to show curiosity,” Sea Shepherd France tweeted. Overnight the whale “rubbed itself on the lock's wall and got rid of patches that had appeared on its back. Antibiotics may also have helped.”

The lost Beluga was first seen in France’s river, far from its Arctic habitat, last week. Drone footage shot by French fire services showed the whale gently meandering in a stretch of the river’s light green waters between Paris and the Normandy city of Rouen, many dozens of kilometres inland from the sea.

Experts since Friday have tried to feed the beluga with dead herrings and live trout, with no success. Sea Shepherd fears the whale could slowly starve in the waterway and die.

Local authorities said veterinarians have given the whale vitamins and products to stimulate its appetite, as well as some medical treatment.