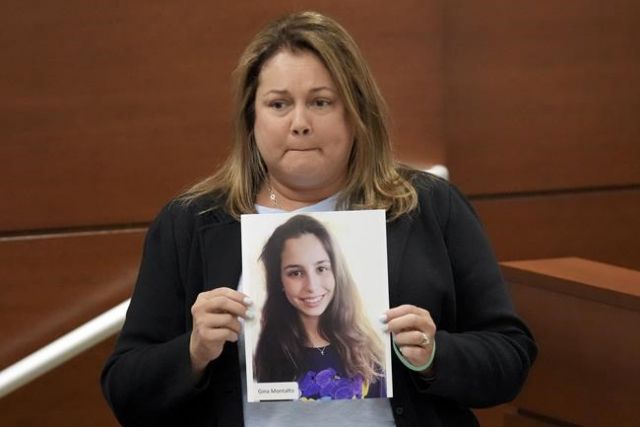 Photo: The Canadian Press
Jennifer Montalto holds a picture of her daughter, Gina, before giving her victim impact statement during the penalty phase of the trial of Marjory Stoneman Douglas High School shooter Nikolas Cruz at the Broward County Courthouse in Fort Lauderdale, Fla., Wednesday, Aug. 3, 2022. Gina Montalto was killed in the 2018 shootings. Cruz previously plead guilty to all 17 counts of premeditated murder and 17 counts of attempted murder in the 2018 shootings. (Amy Beth Bennett/South Florida Sun Sentinel via AP, Pool)

A Girl Scout and avid reader. A trombone player who loved movies and basketball. A straight-A student who loved Irish dance and was looking forward to a trip to Ireland.

Jurors in the trial of Florida school shooter Nikolas Cruz heard tearful statements Wednesday from three families whose children were among the 17 he murdered at Parkland's Marjory Stoneman Douglas High School on Feb. 14, 2018. It was the third straight day of such testimony — but it didn't make it any easier to hear as once again jurors, spectators and even Cruz's lawyers wiped away tears.

Fourteen families have now given statements, with the final three set for Thursday after the jury tours the three-story classroom building where the massacre took place.

Cruz, 23, pleaded guilty in October to the murders; the trial, in its third week, is only to decide if he will be sentenced to death or life without parole.

Tony and Jennifer Montalto told the seven-man, five-woman jury and 10 alternates how their daughter Gina had saved a toddler from drowning when she was 10, and described the turtle figurine the child's grateful mother gave her. It still decorates her now unused room.

Gina, who was 14 when she died, had an infectious personality, they said, and was an avid reader.

“She once told me she wanted to live in a library,” her mother said. The children's wing at the Parkland library is now named for her.

Her father, wearing the same suit he wore to their last father-daughter dance, said her death has driven a wedge between him and his wife and left her younger brother angry.

“Gina was our best girl and Anthony our best boy,’’ he said. “My son struggles to make sense of Gina’s death at her school.”

They used to play together “filling our house with laughter," he said. “Now there is deafening silence.”

Max Schachter spoke of his son, Alex, who was a dedicated trombone player in the school band. The 14-year-old also loved movies and played guard on a basketball team.

“Our family is broken. There is a constant emptiness,” his father said, adding that there is a part of him that will “always be sad and miserable.”

He said the family is haunted by the fact that they will never know whether Alex would have gone to his dream school, the University of Connecticut, or stayed closer to home.

“It’s an ache that is just constant,” he said. “I wish every single day that this was a nightmare that I could wake up from."

He said that at 5 a.m. on the day of Alex’s funeral, he and Alex's older brother, Ryan, were struggling to finish his eulogy when Ryan suggested looking in Alex’s bedroom trash can. There they found a poem titled “Life is like a Roller-coaster,” which Alex had written for his English class. Ryan read it for the jury.

Isabel Dalu, a friend who spoke on behalf of the family of shooting victim Cara Loughran, said Cara always reminded her of a “porcelain doll.” She made straight A's, loved the beach and to surf. She also was looking forward to a vacation in Ireland the family had planned for the summer of 2018, Dalu said.

“Losing Cara has left a crushing absence in their lives,” Dalu said.

Dalu's daughter was Cara’s “first friend and the big sister she didn’t have,” she said. The two loved Irish dancing, and Cara was looking forward to performing at the St. Patrick’s Day festival, she said.

Dalu said her own daughter still does Irish dance "to continue Cara’s legacy.”