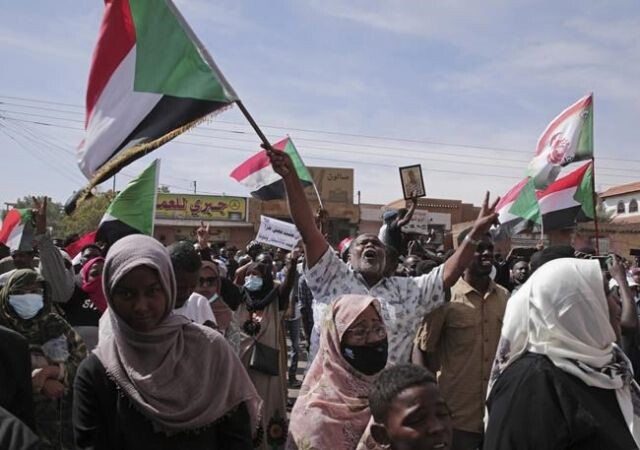 Tribal clashes over the past week in Sudan’s war-ravaged Darfur have killed around 100 people, the U.N. refugee agency and a tribal elder said Monday, the latest surge in violence in the restive region.

Toby Harward, a coordinator with the UNHCR, said the fighting grew out of a land dispute between Arab and African tribes in the town of Kulbus in West Darfur province. Local Arab militias then attacked multiple villages in the area, forcing thousands of people to flee, he said.

Abkar al-Toum, a tribal leader in the town, said the dead included at least 62 bodies found burned after militias set more than 20 villages on fire. He said many people were still unaccounted for. He claimed the attackers gained control of water resources, aggravating the humanitarian situation in the area. He did not elaborate.

Abbas Mustafa, a local official, said authorities have deployed more troops to the area. He said the past week of fighting displaced at least 5,000 families.

Harward called for “neutral joint forces” to provide protection for civilians in the area. “If there is no intervention or mediation, & violence is allowed to continue, farmers will not be able to cultivate & the agricultural season will fail,” he said in a series of posts on Twitter.

The news outlet Radio Dabanga reported that the fighting reached the nearby province of North Darfur, causing partial damage to two villages there.

The U.N. envoy for Sudan, Volker Perthes, said he was “appalled again” by the clashes in Kulbus. “The cycle of violence in Darfur is unacceptable & highlights root causes that must be addressed,” he said on Twitter.

The fighting was the latest bout of tribal violence in Darfur. It came as the country remains mired in a wider crisis following an October military coup. The takeover upended Sudan’s transition to democracy after a popular uprising forced the removal of longtime autocrat Omar al-Bashir in April 2019.

Since late last year, eruptions of tribal violence and surges in the fighting in Darfur have killed hundreds of people. In April, after a similar bout of cashes killed over 200, the Sudanese military said it deployed a brigade to the province.

However, the violence has raised questions over whether Sudanese military leaders are capable of bringing security to Darfur. In 2020, the U.N. Security Council ended its peacekeeping mission there. In recent months, local aid workers have called on the U.N. to redeploy peacekeepers to the region amid a sure in tribal violence.

The Darfur conflict began in 2003 when ethnic Africans rebelled, accusing the Arab-dominated government in the capital of Khartoum of discrimination. Al-Bashir’s government was accused of retaliating by arming local nomadic Arab tribes and unleashing militias known as the janjaweed on civilians there — a charge it denies.

Al-Bashir, who has been in prison in Khartoum since he was ousted from power in 2019, was indicted over a decade ago by the International Criminal Court for genocide and crimes against humanity perpetrated in Darfur.