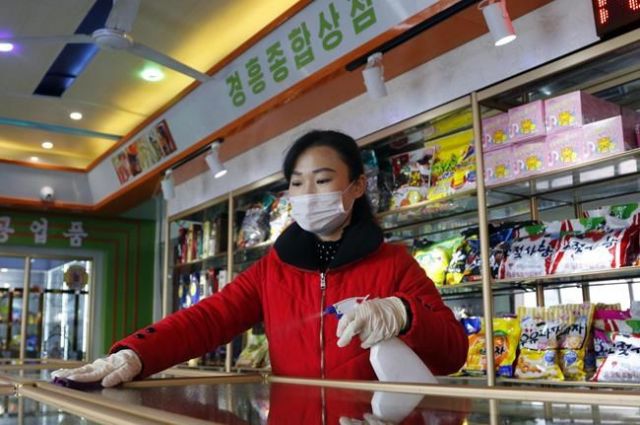 Photo: The Canadian Press
FILE - An employee of the Kyonghung Foodstuff General Store disinfects the showroom countertops in Pyongyang, North Korea, Wednesday, Nov. 10, 2021. Before acknowledging domestic COVID-19 cases, Thursday, May 12, 2022, North Korea spent 2 1/2 years rejecting outside offers of vaccines and steadfastly claiming that its superior socialist system was protecting its 26 million people from “a malicious virus” that had killed millions around the world. (AP Photo/Cha Song Ho, File)

North Korea on Saturday reported 21 new deaths and 174,440 more people with fever symptoms as the country scrambles to slow the spread of COVID-19 across its unvaccinated population.

The deaths and cases, which were from Friday, increased total numbers to 27 deaths and 524,440 illnesses amid a rapid spread of fever since late April. North Korea said 243,630 people had recovered and 280,810 remained in quarantine. State media didn’t specify how many of the fever cases and deaths were confirmed as COVID-19 infections.

The country imposed nationwide lockdowns on Thursday after confirming its first COVID-19 cases since the start of the pandemic.

North Korean leader Kim Jong Un during a meeting on anti-virus strategies on Saturday described the outbreak as a historically “huge disruption” and called for unity between the government and people to stabilize the outbreak as quickly as possible.

Experts say a failure to control the spread of COVID-19 could have devastating consequences in North Korea, considering the country’s poor health care system and that its 26 million people are largely unvaccinated.

State media said tests of virus samples collected Sunday from an unspecified number of people with fevers in the country’s capital, Pyongyang, confirmed they were infected with the omicron variant. The country has so far officially confirmed one death as linked to an omicron infection.

The viral spread could have been accelerated after an estimated tens of thousands of civilians and troops gathered for a massive military parade in Pyongyang on April 25, where Kim took center stage and showcased the most powerful missiles of his military nuclear program.