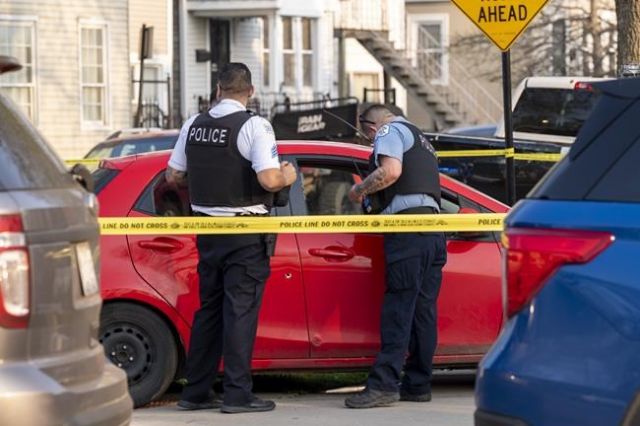 Photo: The Canadian Press
Chicago police officers secure a red car that crashed into a fence in the 4500 block of South Marshfield Avenue that is suspected to be related to a fatal shooting Tuesday, May 10, 2022 in Chicago. (Tyler Pasciak LaRiviere /Chicago Sun-Times via AP)

One person was killed and 10 were injured in two shootings on Chicago’s South Side in the space of six hours, a spasm of gun violence on the hottest day of 2022 so far, serving as a warning that the city is entering the warmest and deadliest time of year.

The victims were among 21 people who were shot in the city Tuesday.

As of May 8, the Chicago Police Department had recorded 779 shooting incidents and 194 homicides, compared to 898 shootings and 207 homicides during the same period in 2021. Chicago and other U.S. cities reported dramatic spikes in homicide totals last year; Chicago's 797 homicides in 2021 — its highest toll for any year in a quarter century — eclipsed Los Angeles' tally by 400 and the total in New York by nearly 300.

The latest gun violence in Chicago came amid a wave of mass shootings — defined by the Gun Violence Archive as shootings in which at least four people are shot — in big cities and smaller communities across the U.S.

In the first incident Tuesday, around 4:30 p.m. in the Back of the Yards neighborhood, people who have yet to be identified climbed out of a stolen car and opened fire, police said. Five teenagers were shot, including a 19-year-old who was struck in the head and pronounced dead at a hospital soon after. His name has not been released.

Two of the five were critically injured. A 16-year-old boy was struck four times including once in the face, and an 18-year-old man was shot in the hip and knee. Police said both are expected to survive.

The gunmen sped off, crashed the car then fled on foot, leaving three guns behind, police said.

Chicago Police Superintendent David Brown said investigators believe that shooting was part of an ongoing gang war that flared up last month when the brother of one gang leader was shot to death, allegedly by a rival gang member.

Brown said officers at the scene Tuesday afternoon were attacked by gang members as they tried to administer life-saving measures to the wounded. He said two known gang members were arrested and charged with aggravated battery of a police officer.

At about 10:30 p.m. in Jackson Park, where the Obama Presidential Center is under construction, occupants of an SUV opened fire, striking four women and two men, before speeding off. The victims were taken to hospitals and two of the women were in serious condition, police said.

Brown said that shooting could be linked to a dispute between two groups over the disruption of a rap performance that was livestreamed on Facebook.

No one has been arrested in either of the shootings.

About an hour later, a man and a woman were wounded in another shooting in Jackson Park, but police couldn't say if the two park shootings were related.

Chicago’s police department has been loathe to pin spikes in violent crime on warmer temperatures and the closest Brown came to suggesting the weather was a factor in Tuesday’s shootings was when he said the first shooting in Jackson Park came at a time when a lot of people were in the park “enjoying the nice weather.”

But it has long been a fact in Chicago and elsewhere that as temperatures rise, so do the number of shootings. And Tuesday, after two weeks in which temperatures lingered in the 50s and 60s, the high was 89 degrees in Chicago, according to the National Weather Service. Wednesday was even hotter, at 91.