Ukraine calls for Russia to let women and children escape 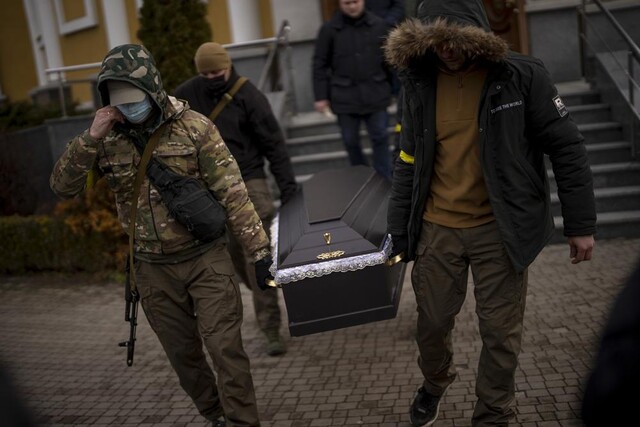 Photo: The Canadian Press
Militia men carry the coffin with the body of Volodymyr Nezhenets, 54, during his funeral in the city of Kyiv, Ukraine, Friday, March 4, 2022. A small group of reservists are burying their comrade, 54-year-old Volodymyr Nezhenets, who was one of three killed on Feb. 26 in an ambush Ukrainian authorities say was caused by Russian 'saboteurs'. (AP Photo/Emilio Morenatti)

The head of Ukraine’s security council called on Russia to create humanitarian corridors to allow children, women and the elderly to escape the fighting.

Oleksiy Danilov said Friday more than 840 children have been wounded in the war. A day earlier, the Ukrainian government put the death toll among children at 28.

He spoke ahead of the latest talks between Ukrainian and Russian delegations, planned for this weekend.

“The question of humanitarian corridors is question No. 1.,” Danilov said on Ukrainian television. “Children, women, elderly people – what are they doing here?”

Russian troops have encircled and blockaded several large cities in the south of the country, including Mariupol, trying to cut Ukraine off from the Black and Azov seas.

Ukrainian officials have asked for help from the Red Cross in organizing corridors, describing the situation in the blockaded cities as “close to a catastrophe.”

Ukrainian President Volodymyr Zelenskyy will talk to U.S. senators on a video conference call Saturday morning, according to a person familiar with the invitation from the Ukrainian embassy.

All senators are invited to the call, according to the person, who requested anonymity to discuss the private invitation. The meeting will be the first time lawmakers have talked to the Ukrainian president since Russia invaded his country.

The call will come as Congress is considering a request for $10 billion in emergency funding, with money going toward humanitarian aid and security needs in the war-torn country. Approval could come as soon as next week.

In a bitter and emotional speech, Zelenskyy criticized NATO for refusing to impose a no-fly zone over Ukraine, saying it will fully untie Russia’s hands as it escalates its attack from the air.

“All the people who die from this day forward will also die because of you, because of your weakness, because of your lack of unity,” he said in a nighttime address. “The alliance has given the green light to the bombing of Ukrainian cities and villages by refusing to create a no-fly zone.”

On Friday, NATO refused to impose a no-fly zone, warning that to do so could provoke widespread war in Europe with nuclear-armed Russia.

“All that the alliance was able to do today was to pass through its procurement system 50 tons of diesel fuel for Ukraine. Perhaps so we could burn the Budapest Memorandum,” Zelenskyy said, referring to the 1994 security guarantees given to Ukraine in exchange for the withdrawal of its Soviet-era nuclear weapons.

“You will not be able to pay us off with liters of fuel for the liters of our blood, shed for our common Europe.”

He said Ukrainians will continue to resist and have already destroyed Russia’s plans for a lightning invasion “having endured nine days of darkness and evil.”

“We are warriors of light,” he said. “The history of Europe will remember this forever.”