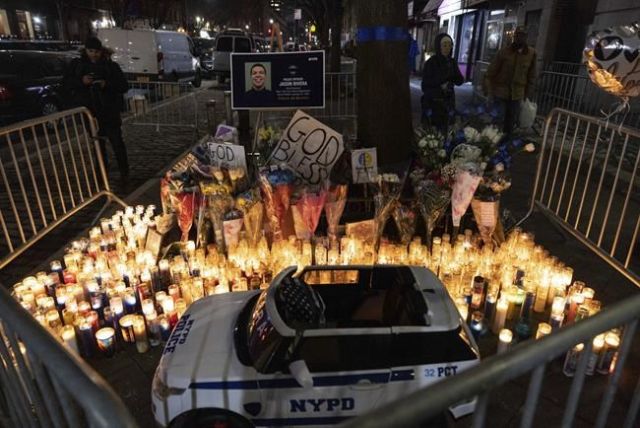 Photo: The Canadian Press
A makeshift memorial is seen outside the New York City Police Department's 32nd Precinct near the scene of a shooting days earlier in the Harlem neighborhood of New York, Monday Jan. 24, 2022.

A New York City police officer gravely wounded last week in a Harlem shooting that killed his partner has also died of his injuries, the city’s police commissioner said Tuesday, adding to what she called “incalculable” grief within the department.

Officer Wilbert Mora, 27, was taken off life support at a Manhattan hospital four days after a gunman shot him and Officer Jason Rivera, 22, as they responded to a domestic disturbance call. Rivera died Friday.

Mora had been in critical condition since the shooting. He was moved Sunday from Harlem Hospital to NYU Langone Medical Center, where he died.

“It’s with great sadness I announce the passing of Police Officer Wilbert Mora,” Sewell said in a tweet. “Wilbert is 3 times a hero. For choosing a life of service. For sacrificing his life to protect others. For giving life even in death through organ donation. Our heads are bowed & our hearts are heavy.”

In a message to officers announcing Mora's death, Sewell said: “The grief in this Department is incalculable. We will stand, salute and shed tears, yet manage to smile as we remember him during the extremely difficult days ahead."

The two officers were fatally wounded Friday after they were called to a Harlem apartment by a woman who said she needed help with her adult son. Lashawn J. McNeil threw open a bedroom door and shot the officers as they walked down a narrow hall, authorities said.

A third officer, Sumit Sulan, a rookie who was shadowing Mora and Rivera — shot McNeil as he tried to flee. The gunman, 47, died Monday, authorities said.

McNeil’s mother told the New York Post she was trying to convince her son to get help for mental health issues and that she wouldn't have called 911 had she known he was going to use violence against the officers.

Mora and Rivera “were dedicated, courageous and compassionate officers, loved by many. The pain their families feel is immeasurable. We pray for them; we will be strong for them,” Sewell said in the message.

Even after it was clear Mora wouldn't survive the shooting, he was kept on life support and moved to NYU Langone so his organs could be donated in accordance with his and his family's wishes — a gift that Leonard Achan, head of organ donation organization LiveOnNY, said was expected to save “many lives.”

The officers' deaths echoed the 2014 killings of another pair of officers, Wenjian Liu, 32, and Rafael Ramos, 40, who were fatally shot by a man who ambushed them as they sat in their patrol car.

Mora and Rivera were the first NYPD officers killed in the line of duty by a gunman since 2017, when Miosotis Familia, 48, was ambushed as she wrote in a notebook in a mobile command post in the Bronx. Two officers killed in 2019 died by friendly fire.

Police said McNeil used a handgun that had been reported stolen in Baltimore in 2017 and that the gun was equipped with a high-capacity magazine. Police said they also found a loaded semi-automatic rifle under his mattress.

Mora entered the police academy in October 2018 and was assigned to the Harlem precinct where the shooting happened since November 2019. He made 33 arrests, police records show.

An officer who worked with Mora and Rivera remembered how Mora’s powerful physique — tall and stocky with a football player’s frame — belied how approachable he was.

“He was a very humble young man. He was always happy, always eager to help anyway he could,” Officer Keith Hall said Tuesday.

“I just grieve for his family. I’m grieving on my own, but I can only imagine what the family’s feeling,” said Hall, who has collected more than $310,000 in a fundraiser for the slain officers' families.

“The city should be grieving after losing two great people who were great, great individuals who served the community and then paid the ultimate sacrifice. So we all should be heavy hearted right now.”

Irina Zakirova, a professor who taught Mora at John Jay College of Criminal Justice, remembered the officer as an earnest and engaged student.

“He cared about people and the community,” Zakirova said, adding that he was particularly interested in finding different and innovative ways in improving relationships between police and the neighborhoods they patrolled.

The head of the city's largest police union, the Police Benevolent Association, said Tuesday “True heroes never die” and that Mora will "live on in the heart of every New York City police officer from this day forward."

“We are called upon to put ourselves between evil and the good people of this city,” PBA President Patrick Lynch said in a statement. “Police Officer Mora showed us what it means to carry out our mission with courage, skill and humanity.”

Mora’s funeral arrangements have not been announced.

Rivera's funeral is scheduled for Friday at St. Patrick’s Cathedral in Manhattan, with a viewing planned Thursday at the church.

Rivera wrote in an essay upon joining the force in 2020 that he became an officer to “better the relationship between the community and the police.”