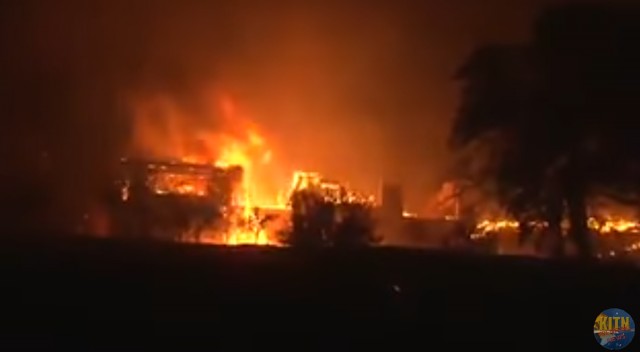 Mandatory evacuations were ordered after blazes broke out late Sunday across four counties as strong winds buffeted the area,

"It was an inferno like you've never seen before," said Marian Williams, who caravanned with neighbours through flames before dawn as one of the wildfires reached the vineyards and ridges at her small Sonoma County town of Kenwood.

Williams could feel the heat of her fire through the car as she fled.

With so many fires, residents of Sonoma County struggled to figure out what roads to take, finding downed trees or flames blocking some routes in the region north of San Francisco Bay.

The Press Democrat reported that flames destroyed homes and a historic barn, and authorities worked to clear out hospitals and senior centres in northwestern Santa Rosa, which is about 54 miles (86 kilometres) north of San Francisco.

Deputies were dispatched to help firefighters and California Highway Patrol officers with evacuations, according to the Sonoma County Sheriff's Office.

"Everyone in Sonoma County is spread out fighting these fires, but they don't have enough resources to handle something like this. The only thing we can do is hope the wind will come down," he said.

The National Weather Service said widespread wind gusts between 35 mph and 50 mph were observed in the north San Francisco Bay region and isolated spots hit 70 mph. The winds were expected to subside at midday.

Community centres, the Sonoma County Fairgrounds and other local centres were opened for evacuees.