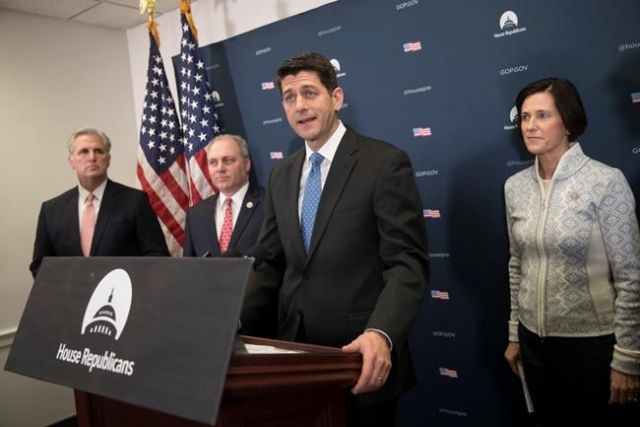 Congress will move legislation this year providing up to $15 billion to build a wall along the Mexican boundary, Republican leaders said Thursday. But they would not say how they would prevent the massive project from adding to federal deficits.

House Speaker Paul Ryan, R-Wis., and Senate Majority Leader Mitch McConnell, R-Ky., told reporters at a GOP strategy retreat that they were planning legislation providing $12 billion to $15 billion for constructing the wall, one of President Donald Trump's chief goals. Ryan said the goal is to complete that and other major bills in 2017, but the leaders offered no details on how the wall would be paid for, saying they would wait until the Trump administration proposes legislation.

Trump has repeatedly said Mexico will pay for the wall, but Mexican leaders oppose it and have said they won't finance it.

Congress will pay for "the construction of the physical barrier on the border," Ryan said.

"We intend to address the wall issue ourselves," said McConnell.

Pressed on whether construction would increase federal deficits, Ryan said Republicans are fiscal conservatives. He said strengthening the economy and replacing President Barack Obama's health care system were two of the best ways to bolster the government's budget.

"If we're going to be spending on things like infrastructure, we're going to find the fiscal space to pay for that" in a budget Congress plans to write this spring, Ryan said.

Ryan had previously used figures ranging from $8 billion to $14 billion as his estimate for the cost of the wall.

Trump was to speak Thursday to House and Senate GOP lawmakers at their annual policy retreat. Despite a rocky start to his administration, many lawmakers are optimistic about delivering change in a new era of GOP control over Washington.

They would like to see a Trump committed to their agenda and results, not a president who veers off course into conspiracy theories about voter fraud or who keeps litigating the size of his inaugural crowds.

Before Trump's appearance, Ryan sketched out an ambitious agenda to lawmakers that includes sending Trump a health care repeal bill by March and a rewrite of tax laws by summer's end.