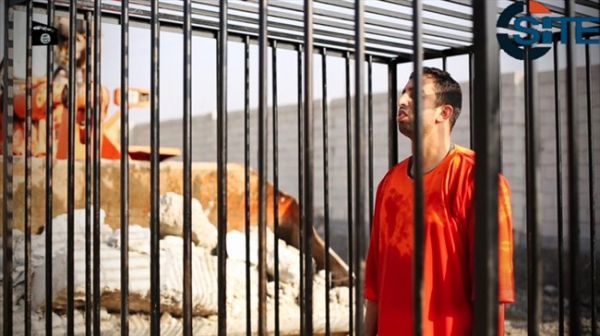 A video of a Jordanian pilot being burned to death was exceptional in its brutality, even for the Islamic State group, and also was a sign that the militants intend to raise the stakes in their propaganda efforts, experts say.

It also offered confirmation to the belief that the airman was killed days or weeks before its release.

The 22-minute clip that appeared on websites Tuesday was a complex, extravagant work that would have taken a significant amount of time and organization to script, stage, produce and distribute, they said.

It also suggested that the demands last week for a prisoner swap for the pilot, Lt. Muath al-Kasaesbeh, were a cynical charade to increase the drama around his killing, because he most likely was already dead.

Jordanian state TV had said al-Kasaesbeh, who was flying missions for the U.S.-led campaign of airstrikes, was killed as long ago as Jan. 3, shortly after his F-16 came down in Islamic State-controlled territory in December.

"The more gruesome the executions are, the more attention they get," said Brigitte Nacos, a professor of political science at Columbia University.

"When President Obama responds to each of their killing videos ... that gives them the feeling of being a powerful political actor that legitimate actors have to deal with," she said.

The video featured production techniques used in other clips from the militants. But unlike those that showed beheadings in which the hostages or their killer delivered a message before being killed, the pilot video is longer and involves a story-telling narrative and at least four cameras, along with advanced editing techniques.

It bore the logo of the Islamic State group's al-Furqan media service and included footage of Jordan's king committing to the fight against IS and meeting with U.S. officials. The pilot was shown explaining his mission on the day his jet crashed. Finally, he was seen in an outdoor cage as a masked militant ignited a line of fuel leading to it. It also included a list of purported Jordanian pilots wanted by the group.

"This is simply the most horrific, disgusting thing I have seen from Islamic State in the last two years. It is shocking," said Shiraz Maher, senior fellow at the International Center for Study of Radicalization at King's College in London.

"They're basically rejecting everything that is Western, yet they're borrowing — in their media management, staging, directing, choreography — everything that you can learn from Western filmmakers and media people," she said.

Nacos said the video's brutality risks turning public opinion and potential recruits away from the Islamic State group; al-Kasaesbeh's killing already has been denounced by Muslim clerics across the region, including some jihadi ideologues.

Christopher Davidson, an academic at Durham University, said the video was not perfectly produced, but had "very powerful political messages which clearly resonate with impressionable youth."

Hassan Hassan, an analyst at the Abu Dhabi-based Delma centre, said having a captive pilot from the U.S.-led coalition bombing campaign was a rare opportunity for the extremists to deliver a strong message.

"It was a chance to humiliate not only Jordan but the international community fighting against it," he said.

Aymenn al-Tamimi, an expert on rebel and Islamic extremist groups, said the video suggested the group's violence would only become more gruesome as its fighters — and supporters — became increasingly desensitized to human suffering.

"The beheadings that have been happening so frequently — it's no longer surprising to any audience," al-Tamimi said. "They upped the ante."