Prosecutors say two 12-year-old southeastern Wisconsin girls stabbed their 12-year-old friend nearly to death in the woods to please a mythological creature they learned about online. 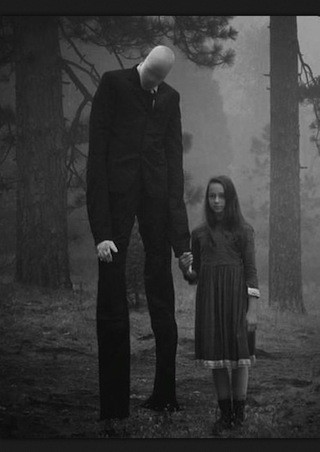 Both girls were charged as adults with first-degree attempted homicide Monday in Waukesha County Circuit Court; they each face up to 60 years in prison if convicted. A court commissioner set bail at $500,000 cash per child. According to a criminal complaint, the girls had been planning to kill their friend for months and finally made the attempt in a park on Saturday morning, after a slumber party.

One of the girls told a detective they were trying to become "proxies" of Slender Man, a mythological demon-like character they learned about on creepypasta.wikia.com, a website about horror stories and legends. They planned to run away to the demon's forest mansion after the slaying, the complaint said.

"I recognize their young ages but it's still unbelievable," Court Commissioner Thomas Pieper said during one of the girls' initial court appearances Monday.

The victim suffered 19 stab wounds; one missed a major artery near her heart by a millimetre, doctors told police. She was in stable condition Monday. The court documents did not provide her name.

The Associated Press isn't naming either girl who is charged because at least one of their attorneys plans to pursue moving her case into juvenile court, where proceedings are secret.

Both girls appeared in court wearing shackles and jail jumpsuits. They were surrounded by sheriff's bailiffs, who towered over them. Family members of one of the girls wept openly as reporters snapped photographs. The other girl's family sat stone-faced.

According to the criminal complaint, one of the girls told an investigator they began planning to kill their friend in December. The other girl told police they decided to kill her so they could become proxies of Slender Man, who would accept them and let them live with him in his mansion in the Nicolet National Forest.

The other girl said she sees Slender Man in her dreams. She said he watches her and can read her mind and teleport.

"It's extremely disturbing as a parent and as chief of police," Waukesha Police Chief Russell Jack said at a news conference ahead of the court appearances Monday.

The girls invited their friend to a slumber party on Friday evening, the complaint said. They planned to kill her during the night so they wouldn't have to look into her eyes, one girl told police, and then run away. They decided to put it off, but the next day, during a hide-and-seek game in a wooded park, they attacked their friend with a knife. One girl told the other to "go ballistic, go crazy," according to the complaint.

The victim began to scream that she hated them and started stumbling away, one of the girls told police.

The girls left the victim lying in the woods. She crawled to a road where a bicyclist found her lying on the sidewalk. Police arrived and she gave them the name of one of the girls who attacked her.

She was rushed into surgery, police said.

One of the girl's attorneys, Donna Kuchler, asked Pieper to remove reporters from the courtroom because she planned to attempt to get her client waived into juvenile court. Pieper refused. Kuchler escorted the girl's family out of the courtroom, telling reporters only that the family was horrified at what happened.

The other girl's lawyer, Joseph Smith, led her family out of court. He declined to comment.

Both girls are due back in court on June 11 for a status conference.