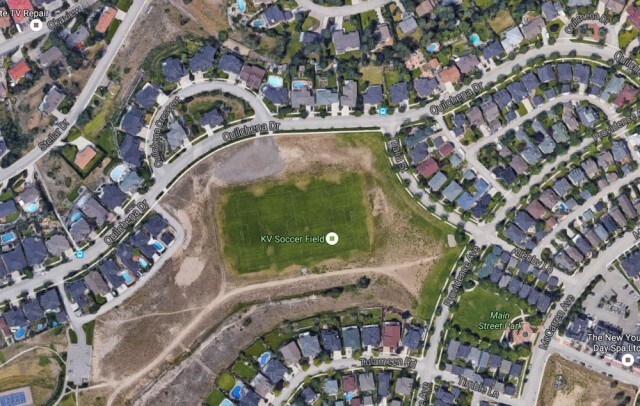 Earlier this month, Kelowna city council issued a rare defeat for new housing, by opposing a proposal that included 67 single-detached homes, improvements to connecting pathways, and a half-sized soccer field in the Kettle Valley neighbourhood.

By a vote of 5-4, and for the second time in five years, council defeated a development proposal for an undeveloped portion of land currently home to a full-sized soccer field, and was once going to be the home of a School District 23 school.

When residents first bought into the Kettle Valley neighbourhood, they were told this land would be the home to a new school, which was even included in the marketing materials for the development. Buyers purchased homes alongside the school site believing that they would be backing onto the school with its corresponding playing fields and condensed form. However, SD23 only had an option to purchase the land – and when the time came to exercise that option, the school district passed and the land effectively returned to the developer to do with it what it wanted.

In the meantime, the lands were turned into a full-sized soccer field surrounded by undeveloped lands, which is leased to the City of Kelowna at a price of $1 per year.

Of the many issues raised by local residents, two in particular were notable. The first was that the proposal would result in the community losing half of its current sports field. In the developer’s eyes, and in some of council’s eyes, the community never ‘had’ this field as it belonged to the developer, so in their interpretation the community was gaining half a soccer field. In reality, the community has had access to the full-sized field for over 20 years.

The second issue was that this proposal did not stick to the vision or footprint of the original master-planned school site. Some on council dismissed comments related to the original school footprint by stating that the school is not coming back – which no one suggested it would – yet, the fact remains that residents bought their homes on the basis that they would back onto a school and not another subdivision.

Coun. Gail Given, who supported the development, asked what dissenting voices want the developer to come back with. I believe the answer is relatively simple. Future proposals should address two key points: (1) develop a proposal that better resembles the initial school footprint and (2) keep the full-size soccer field.

Some on council wrongfully suggested that something is better nothing.

Kelowna doesn’t have to settle, developers want to build homes here. Coun. Charlie Hodge rightfully said that Kelowna is a world-class city and we should demand world-class developments. There is nothing wrong with rejecting proposals because they’re not good enough. Though Kelowna does need more housing supply, this proposal was a very unique circumstance – and because of that, council owes it to the residents to ensure the future of the site resembles the vision they were sold as closely as possible.

People should control the future of their communities, not developers.

Over 900 residents signed a petition asking council to oppose this development, based primarily on these two reasons. It’s good see that five councillors agreed with the community; it’s a shame they all didn’t.