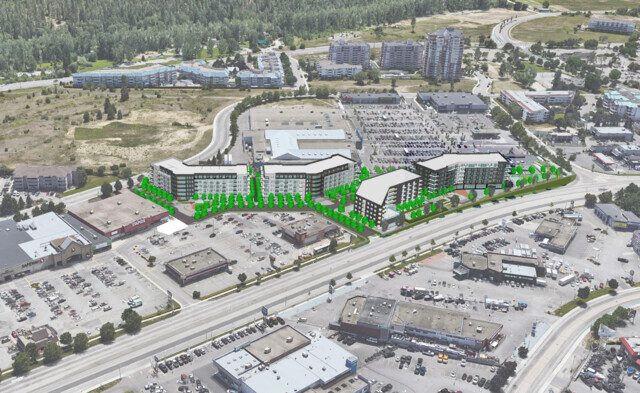 A revitalization of the Dilworth strip mall along Highway 97 next to Superstore is being proposed by Vancouver’s Peterson Group – and frankly it’s the kind of change we should welcome in Kelowna.

The proposal would replace 11 retail units and a surface parking lot with four six-storey apartment buildings with 466 new residential units and 10,000 square feet of retail space. Now before people start talking about the traffic issues of new developments, let’s explore the merits of this proposal first.

Kelowna is primarily a vehicle city, most trips are made in our cars and this will likely remain the case for the foreseeable future. We’re adding more residents all the time and regardless of what anyone thinks about our once small city growing each year, there’s nothing anyone can do to stop that. If we simply stop building homes, housing prices will go up and new people will simply move to neighbouring towns and pay their taxes there, while still working, playing and using facilities in Kelowna without adding to our tax base. In addition, we will price out our children and their children from ever being able to live here.

The people who would move into these proposed buildings would be able to make their trips to the grocery store, hardware store, home office store and more by foot. Yes, they will likely all own cars, but with more trips made by foot, we will reduce the demand on our roadways in a way that’s not possible when developments are far from stores.

It’s also important to think about where we want apartments and what we want them to look like. Our recent councils have rightly or wrongly chosen to approve vast quantities of high-rise condo towers downtown. They’ve seen this as a quick fix to a supply problem and a way to revitalize downtown. However, the truth is that in a tourism-oriented city like Kelowna, condo towers by the lake will be bought up by investors and rented monthly or weekly during the summer months to the highest out-of-town bidder. If you’ve ever tried to rent in Kelowna, you know that finding somewhere to rent for a full year, rather than just for the non-summer months is not easy.

Of course, the other way to tackle this supply issue is to approve more low- and mid-rise apartments throughout downtown and into under-utilized areas that are currently slated for increased densification or not currently home to housing. When you build mid-rise apartment buildings at the bottom of Dilworth next to the Superstore, they will be owned and lived-in by Kelowna residents year-round – or purchased and rented year-round – rather than rented to tourists for high prices during the summer.

Proposals like Peterson’s Dilworth revitalization bring brand-new apartment housing, which is more affordable than single-family homes, to a new area. By bringing apartments with at-grade retail space into an existing big box retail area, the city can increase density without changing the fabric of existing communities, which often lead to community-level conflict. In addition, by focusing on low- and mid-rise buildings, we can build up our housing supply without irreparably altering and destroying the mountain and lake views that help make Kelowna the best place in Canada.

Is there room to improve on this development? Absolutely, there always is. But this is a good start and the right place.