Earlier this week Pianos in the Park was launched in Kelowna. You may have already seen them but you should know that Kelowna now has 5 pianos downtown for the public to use at their leisure.  It’s a program that is modeled after the growingly popular “Street Pianos” initiative that is happening in various cities throughout the world. http://www.streetpianos.com/
It all started last summer when a busker, Leila Neverland, came into the Festivals Kelowna office asking if we would consider looking at hosting a street piano program in Kelowna. The reality was that we were in our event season so we didn't have the time to look into it but she took it upon herself to research what it would take to create such a program in Kelowna. One of her first discoveries was that Elmer at Keystone Music had the ability to supply pianos for the program through both community donations and their stock supply. Over the course of the Winter and Spring he would drop by the Festivals Kelowna office randomly and drop off a piano for the program.
Jumping forward in the spring of 2015 Disney Interactive came on board and offered to use their volunteers to help paint three of the pianos using their in-house creatives. As you see in the video above they chose to focus on Mickey, Puffles, and an Okanagan landscape. So now they are out there waiting to be played. If you see them play them, post a video, use the hashtag #pianosinparks but most of all enjoy seeing our parks animated with the sound of spontaneous music.
For more information on the program you can go to the Festivals Kelowna site: http://festivalskelowna.com/index.php?option=com_content&view=article&id=66&Itemid=21
Or check out the newly dedicated Facebook page: https://www.facebook.com/pages/Pianos-in-Parks/1586004311651154 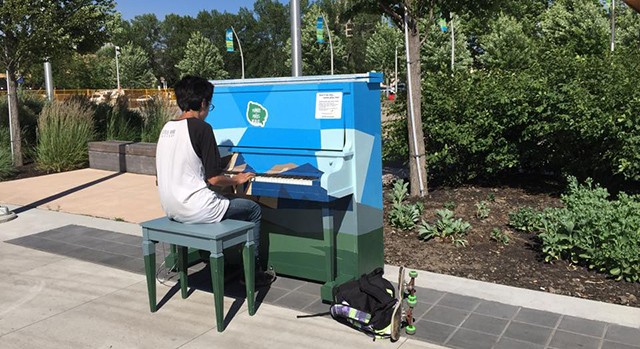