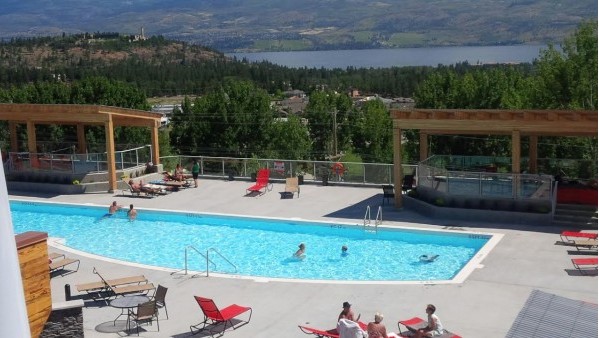 Things are looking up at the Copper Sky condo development in West Kelowna.

They have a brand new pool, deck, and entranceway as part of the rebuilding of amenities following some remediation work that began in 2012.

Residents at the time were not happy, saying it did not appear that builders did a good enough job during the initial build.

The property had already gone into receivership in 2010 and the condos were eventually turned over to KPMG. The value priced homes were sold until the spring of 2012, but that’s when the big problems were discovered.

Cracks began to show up on the pool deck, and along a retaining wall, which forced a massive rebuild of some parts of the development.

Copper Sky then found itself with more negative press last year during reconstruction, when a contractor hit a gas line that leaked fumes for almost an hour and forced the evacuation of the entire property.

But according to those in the know at Copper Sky, things are flourishing once again with a brand new pool, large deck, year-round hot tub and tennis courts overlooking Okanagan Lake.

Long time resident Rod Yule says there had been a lot of dust, noise and eyesores throughout the tough times, but that is all over with now and he has no complaints.

“For a while there it was hard to stay optimistic, because we didn’t know through the receivership what was going to happen.”

He thought about selling when times were tough. But due to dropping prices and the loss of appeal following media coverage of the developments problems, he decided to ride it out.

“When I saw how well they were doing everything -- a lot more attention to detail -- and they did a lot better job this go around, so there was more room for enthusiasm,” he says.

“Its exactly what it was supposed to be in the beginning. I won’t lie, it was tough going through that; the deconstruction and the reconstruction, and we didn’t really know at that point where we were going to end up.”

Those sentiments are echoed by Helen Katnich, who also chose not to sell her unit, and instead bought another.

“Things were changed on the pool deck for the better, but it was a long haul. And I certainly would not have wanted to be one of the first owners, that’s for sure, because it has been a long haul for them,” she says.

“There were some disappointing times when we thought the pool would have been finished earlier, but all in all, I knew there was a lot of negativity, but I knew one day it would be fixed and it would be a great place.”

Things are looking so good at Copper Sky that management now says there is potential for more buildings in the development. 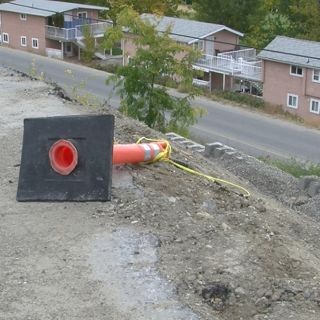 Original story Oct. 23, 2012: The development at Copper Sky is advertised as 'easy living'; residents have found it is anything but easy. They have to put up with closed roads, crumbling pavement and a cracked pool deck.

One homeowner told Castanet that the development is falling apart. "I don't particularly want to live here anymore," he says.

Another woman, who is just renting at Copper Sky, explained many owners of units told her they were upset with the crumbling walls.

"It seems to be taking them a while to fix everything, and you know, it doesn't look like they've done a good job of building it."

Back in 2010 Remple Copper Sky went into receivership and eventually the condos were turned over to KPMG. Vice President Cecil Cheveladave, refused to comment on the construction, stating KPMG never comments to the media during receivership.

The value priced homes were sold until spring of this year. That's when the cracking pool deck and retaining wall were discovered.

Castanet made several calls to get answers about what was happening at the development. No one would answer our questions and everyone told us to talk to KPMG, who were also, not answering questions.

We decided we needed to dig deeper and we went undercover with a hidden camera. Our team acted like they wanted to buy a condo, and even though no one would talk to us about the problems at Copper Sky, they were happy to take us around as perspective buyers. 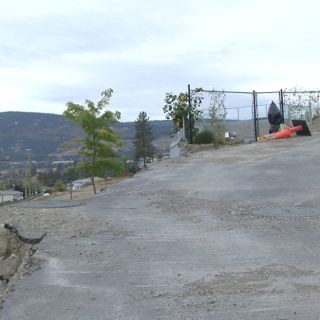 On the day we went shopping the realtor told a group of 'buyers' they will start to sell the units again once an assessment on the pool deck and the retaining wall is complete.

"We are just waiting to hear exactly what the issue is, because it's called material latent defect, it is something that is not discernable to the naked eye. If we sell you the unit and then you find out there is a five thousand or ten thousand dollar assessment you're not going to be happy."

If it turns out there is a fault in the wall, apparently, Copper Sky can seek litigation against the structural engineers, the geo-technical engineers and even West Bank First Nation as they all signed off on the development.

The WFN says it won't be their responsibility because the developer signed a 99 year lease. They also referred all calls to KPMG.

Someone will have to pay for the repairs and if Copper Sky can't get the money through litigation and the contingency reserve for the development won't cover the cost, homeowners will be stuck with the bill.

The realtor gave an example that if there are 200 units in the development and if it were to cost one million dollars to repair the wall, it would cost each home owner $5000.

As for those who thought they got a great deal on the Westside, they are now holding property they can't sell.

One unit owner told Castanet he could try to sell, but it wouldn't be worth it.