Video: West Kelowna is not Hockeyville

Update; In the end it came down to a battle between Ontario and BC.

When all the votes were counted Stirling-Rawdon was a clear winner, beating out West Kelowna's bid by over 1 million votes. 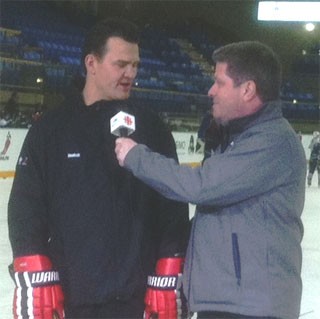 A packed house at Royal LePage place went home disappointed after the announcement was made during the first period intermission of Saturday's NHL game between the Vancouver Canucks and the Calgary Flames.

When the results were announced they confirmed the information contained in a previously leaked press release.

Hours ahead of the scheduled announcement, the Bradenton, Ont. Herald's website published a press release reportedly from Kraft Canada that Stirling-Rawdon was the winner.

Early indications are someone at Kraft inadvertently sent out a release that was scheduled for 7:45 p.m. Pacific time at 7:45 a.m.

STIRLING-RAWDON, ON, March 31, 2012 /PRNewswire/ - The buzzer has sounded, the votes are in and the news is official - Stirling-Rawdon is Kraft Hockeyville 2012. After weeks of determined campaigning, culminating with a national vote to select the winner, Stirling-Rawdon has earned the title of Canada's most passionate hockey community.

Stirling-Rawdon will host a 2012-2013 NHL® pre-season game between the Toronto Maple Leafs and Columbus Blue Jackets, receive $100,000 in arena upgrade money from Kraft Canada, and enjoy a visit from CBC's Hockey Night In Canada. The Ontario town will also receive $10,000 in food bank donations from Kraft Canada.

The four runner-up communities, all of which displayed incredible solidarity and enthusiasm throughout the competition, will have their efforts rewarded with $25,000 each from Kraft Canada to go towards the social hubs they so passionately promoted - their local arena.