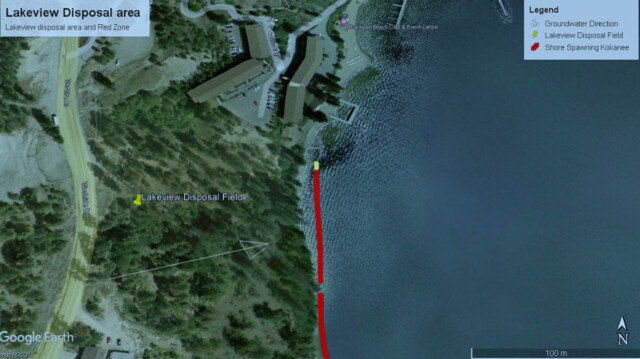 Photo: BC Ministry of Environment
An area of the foreshore adjacent to Lake Okanagan Resort is listed as a red zone area of concern for shore spawning Kokanee.

The BC Ministry of Environment has levied several fines against Lake Okanagan Resort for multiple violations of sewage system permits.

The documents filed under the Natural Resources Compliance & Enforcement Database detail a long history of problems with the resort’s sewage fields and concerns about discharge of nitrogen and phosphorus into Okanagan Lake.

The ministry has issued several violation orders for everything from failing to regularly inspect and maintain the sewage works to not upgrading the wastewater treatment facility at the motel complex on the property to not complying with earlier orders.

Lake Okanagan Resort was ordered to pay $47,870 in fines after the ministry denied repeated attempts to delay compliance and pay earlier levies.

The largest fine, $20,000, was issued for failing to comply with a 2013 amendment letter related to the permit that was first issued in 1981. Under the amendment, the company had until June 30, 2014 to upgrade wastewater treatment works at the motel complex such that the concentration of total nitrogen and total phosphorus in treated effluent dumped into the disposal field was equivalent to or less than 10 mg/L and 1.0 mg/L, respectively.

In 2016, a consulting company sent a letter suggesting that the Lakeview treatment facility for the condo complex at the resort would be upgraded and proposed the installation of two temporary containerized membrane bioreactor wastewater treatment plants during the peak season of July and August of 2016.

Construction of a replacement treatment system was supposed to take place in the fall and it would open in December 2016. An inspection in July 2021 found no evidence of the new facility and that the old disposal fields were still in use.

The ministry found that failure to upgrade the wastewater treatment works resulted in 23 total nitrogen and 24 total phosphorous exceedances. In some cases the nitrogen levels were more than 250% above permitted levels and the phosphorous exceeded allowable limits by over 500%.

An area of the foreshore adjacent to Lake Okanagan Resort is listed as a red zone area of concern for shore spawning Kokanee. A red zone is defined as an area where aggregations of over 50 spawning fish were observed between 2001 to 2014 and over 1,000 spawning fish pre-2001.

The investigations also found that the ownership company, known as 1782 Holdings, failed to post security with the Ministry of Finance in the amount of $109,000 prior to commencing discharge. The security may be applied under the provisions of the Environmental Management Act to correct any inadequacy of the works as it relates to their construction, operation, and maintenance.

In April 2022, 1782 Holdings made a submission asking for the penalty to be reduced claiming it had taken steps to begin the process of permanently repairing or replacing the wastewater treatment facilities and that COVID-19 caused some delay in moving the project forward.

The government, however, was not convinced and noted there had been "no substantive" evidence of progress on the file.

The company has 30 days to pay the fines, or it could attempt to further appeal the rulings.