Man charged with murder after body found in Okanagan Lake 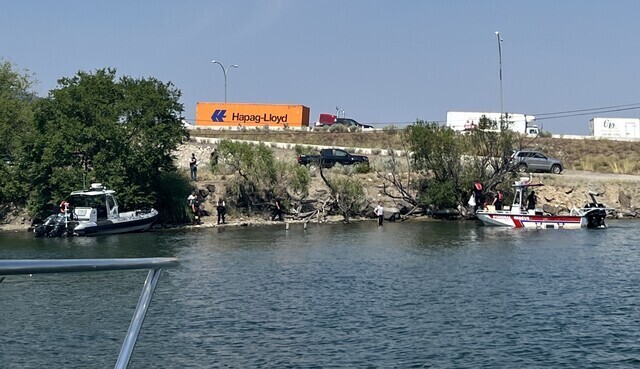 Photo: Contributed
Emergency crews at the scene of a body discovery Friday afternoon on the shores of Okanagan Lake

The Southeast District Major Crime Unit has announced a first-degree murder charge after a body was found in Okanagan Lake near Shelter Bay Marina on Friday.

RCMP say Wyne Zablan, 25, of Kelowna has been arrested for murder and will remain in custody until his next court appearance on August 29.

Police were originally called to the discovery of a body in the water at the west end of the William R. Bennett Bridge shortly after 1:00 p.m. on July 29.

RCMP initially had trouble identifying the victim and appealed to the public for help with a description — an Asian man 20 to 40 years old, with an average height and slim build. He was wearing a black collared shirt and black pants.

“Police have now positively identified the victim and will not be releasing his name pending notification of his next of kin” said Insp. Brent Novakoski, Southeast District senior investigating officer of the BC RCMP Major Crime Section.

“It is evident that Mr. Zablan and the victim knew each other and we feel that there is no risk to the public," Novakoski added.

Should you have any information on this incident, and have not spoken with police please call the SED MCU information line at 1-877-987-8477.