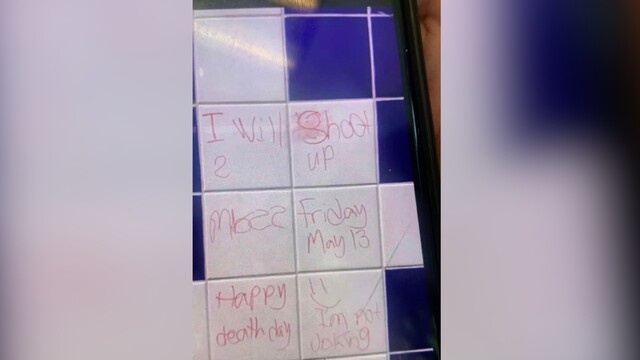 Photo: Contributed
An image circulating widely on social media of a threat to 'shoot up' Mount Boucherie Secondary School.

Parents are rattled by a threat to ‘shoot up’ Mount Boucherie Secondary School.

An image circulating very widely on social media shows a message in red ink or lipstick scrawled across a bathroom wall.

It reads, “I will shoot up MBSS Friday, May 13. Happy death day. I’m not joking.” the message ends with a smiley face.

People on the recently formed Facebook group Parents Against Bullying commented on the post urging parents to contact the RCMP and Central Okanagan Public Schools (SD23).

Lori Rapp helped create Parents Against Bullying and told Castanet she is frustrated. She has been trying to work with SD23 to address her concerns about ongoing bullying.

Lori said one of her grandchildren attends MBSS. The other goes to Constable Neil Bruce Middle School.

“We’ve been trying to get help for this for a long time. Ever since the one girl got beat up. We’ve been trying and fighting and asking for help. I’ve sent letters, even to Jennifer Whiteside, the Minister of Education.”

She calls the threat the final straw. “If someone’s crying out for help like that, do we want to take a chance that this child is going to go and shoot up the school?”

Lori had a conversation with her grandson about the situation. He assured her that the school has an emergency plan and students have an escape route, but that only caused her more concern.

SD23 Superintendent Kevin Kaardal says staff and student safety is top priority and the school district takes these incidents very seriously. The district works systematically through its protocol to determine the level of risk.

Supervision will be raised at the school and RCMP will be on site Friday.

"We have a crisis response team that's activated. We work with Safe Schools BC, and we investigate to find out which student wrote that," said Kaardal.

However, he notes there have been similar threats in the past and they usually don't come to anything.

"This is often someone seeking attention or wanting to see a reaction. But at the same time we take every precaution." He adds 99 times out of 100 they find out who did it, calling it "serious stuff" to incite public panic.

Kaardal worries that the more attention these incidents get, the more panic it creates.