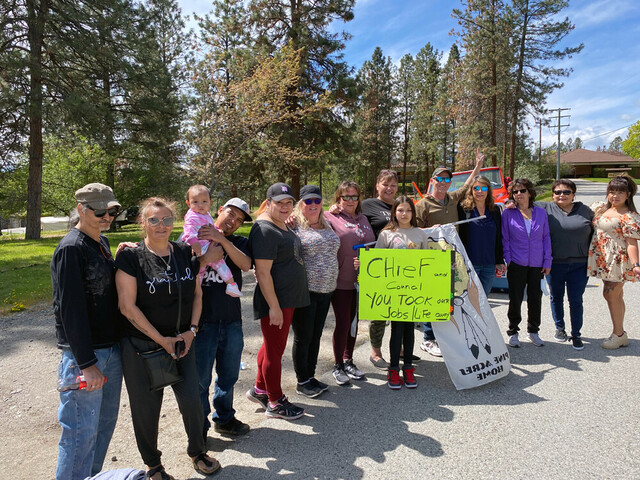 The Westbank First Nation says it was faced with $8 million worth of required upgrades at the Pine Acres long term care home when they announced the closure of the facility last year.

The First Nation has released more information about the care home’s closure days after former employees and members staged a protest demanding answers. WFN also announced Tuesday that it will be appealing an arbitration decision that ruled in favour of the BC General Employees' Union in regards to care home employee severance.

WFN has refused to release the actual arbitration decision, so the details of the dispute are quite murky, but a former Pine Acres employee told Castanet last week that WFN paid out members under the Employment Standards Act, not their collective agreement, which the arbitrator ruled against.

In a news release Tuesday, WFN said it is disputing the “fairness” of the decision, which stated “that the more lucrative ‘layoff’ provision” of the collective agreement applied.

“WFN is arguing the closure of Pine Acres resulted in the termination, not the layoff, of our employees, and as such are exploring our appeal options in order to obtain the best result for our Membership,” said WFN Council.

“Almost immediately, the BCGEU shut down negotiations, declined mediation, and forced WFN into arbitration. We welcome the opportunity to re-engage in respectful and productive negotiations as we believe our people deserve a fair hearing and outcome.”

In a lengthy statement accompanying its news release, WFN said the “vast majority” of care home employees received “reasonable” job offers while still working at Pine Acres after its closure was announced.

WFN says it has paid out $440,000 in severance to former unionized care home employees. It is withholding more severance pending the result of the arbitration appeal. WFN could not say how much more a failed arbitration appeal would cost the membership.

“This led to increased staff burnout, departures, and increased overtime costs. The situation was simply not sustainable,” chief and council said.

WFN chief and council’s statement says they moved the last Pine Acres resident from the facility on Dec. 23, 2021. On Dec. 29, pipes burst and days later the roof failed due to heavy snow.

“If there had still been residents at Pine Acres when this happened, we would have had to evacuate them on an emergency basis during the Christmas holidays. This incident removed any doubt about the need to close the facility,” said chief and council.

WFN also noted that of the 63 long-term care beds at Pine Acres, only 6% were occupied by WFN members. Of the staff employed there, just 9% were members.