Not so smart projectors

If you have the opportunity to buy a product being sold out of the back of a white van, you might want to think twice.

Eric Larssen tells Castanet he wasn't looking for a home theatre projector and screen but when he was approached in the parking lot of the Cask and Barrel Liquor Store in West Kelowna Sunday, he figured, why not?

"Two men driving an unmarked white van claiming to be AV (audio visual) technicians from Calgary who had a contract to upgrade the projectors in the classrooms at UBCO. I was shown a convincing looking work order with a job number."

Larssen says the story seemed legitimate and the manufacturer's suggested retail price was listed at more than $6,000, so he was curious and took a look in the back of the van.

"Lo and behold, it's full of projectors, and projector, screens." Larssen says the salesman told him he could have one of the units for a significant discount.

"I opened my wallet and offered the contents — $145. The technician closed the van doors, and convincingly stated that his partner — the driver, would be infuriated by the offer, but suggested he would accept my cash plus $500. Thinking I had come in to a huge windfall, I accepted the offer and they followed me to the nearby Esso/A&W, where I withdrew $500 from the ATM and completed the exchange.

"Pinching myself, I opened the box as they drove off and lo and behold, there was actually a projector in the box. I was over the moon," Larssen says.

It didn't take long for buyer's remorse to set in though.

"Once I got home and the excitement began to wear off, I started to notice some of the fishy details, which are obvious in hindsight," Larssen says LX is not a recognizable brand of projector. and even though there is a website, there is no contact info or ability to purchase any products.

"I quickly tested the projector itself. The projector is an actual working projector, but with performance much poorer than what was advertised."

Larssen says he did a quick search and determined that new projectors like the one he purchased could be found online ranging between $300 and $400, including a screen. He regrets falling for the sales pitch and wants others to learn from his experience.

So-called "white van scams" are amongst the oldest scams, with Canadian music historian Alan Cross noting "it’s been going on almost as long as guys have been trading cows for magic beans."

Larssen reported the incident to RCMP and says he won't fall for that sales job again, "buyer beware, the scam industry is alive and well in B.C." 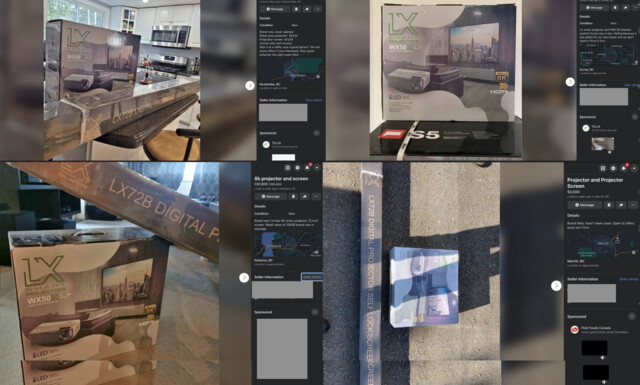 Photo: Marketplace
Ads for LX home theatre projectors on Facebook Marketplace across BC selling for between $1,800-$4,500