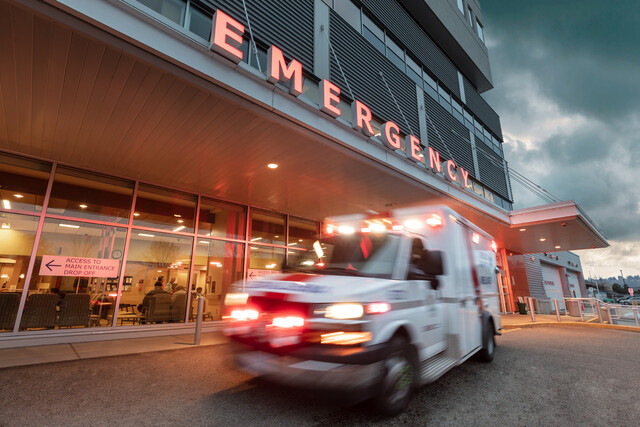 A spokesperson for BC Emergency Health Services has reached out to Castanet to clarify some details regarding the 911 call Bruce Ridden made on April 12.

The BCEHS spokesperson indicated they cannot share much information due to medical privacy issues, "as you can appreciate we are limited in what we can say about specific cases, but here’s what I can offer further to the story."

"I can clarify that following the initial triage conversation, BCEHS call takers can ask callers if they have another way to get the patient to hospital."

Reddin tells Castanet when he was first asked if he had another way to get his wife to the hospital, he asked to speak to a supervisor which extended the time of the call.

Reddin reiterates that he was asked by both the initial 911 call responder and the supervisor that it was a busy night and he was asked if he could find his own way to the hospital.

BCEHS says, "when a 911 call is triaged, BCEHS will look at all options for getting the patient to the right location with the right resources in the right timeframe. Depending on the circumstances, when there are patients that can safely go with family, or by other means to a clinic or the hospital, we will work with the calling party to see if this is an option."

A West Kelowna man says he was told to find his own way to the hospital after calling 911 for an ambulance.

Bruce Ridden tells Castanet his wife, Sheila, became ill on April 12, "she was throwing up non-stop."

"This is serious. I wouldn't call it if there wasn't an issue, and then he says, well, you can take a taxi or take her on the bus, is what he (the 911 dispatcher) told me."

Ridden, who lives in the Glenrosa neighbourhood of West Kelowna, says he spent almost 20 minutes on the phone with dispatchers trying to get his wife an ambulance.

Ridden says he was told an ambulance could not be sent because there were none available.

"You'll just have to figure out a way to get her there."

Ridden says he and his son then began to get Sheila to their van so they could drive her to the hospital when the ambulance showed up.

"I opened the door, and then all sudden, the ambulance guys were there , and I'm just like, 'what the hell is going on?' He says, well, you called an ambulance. I said, 'you have told me they weren't going to send one. They just said, no.' He says, 'well, we're here, let's just deal with this.'"

"They actually ended up at the top of my driveway for 20 minutes trying to stabilize her to get her to the hospital."

Ridden says once his wife made it to the hospital she was taken to ICU where she remained for 11 days.

"I talked to the ER doctors and they said you're lucky you brought her or she would have been dead by morning. That's scary, it's totally scary."

"It just bothers me that the 911 operators determined that there were other options for her to get to the hospital. She was totally unconscious in our bedroom, 'oh, you just need to figure out a different way to get her there'" Ridden says.

Ridden says he's glad the ambulance eventually turned up but he still can't figure out why he was told on the phone that they wouldn't come.

"I opened up the door and they were standing there. I'm just like, what is going on?"

Since that time Ridden says he has followed up with 911 but has still not heard an explanation.

"I put in a request and never heard back, nothing. Absolutely nothing. How many other times has this happened, that we don't hear about?"

E-comm, the agency that handles most of B.C.'s 911 calls, said it was not them who would have directed Ridden to drive his wife to the hospital himself.

"When a caller in the Okanagan dials 9-1-1, they first reach an E-Comm call taker who transfers their call to the agency of request," says a spokesperson for E-Comm 911.

In response to questions, BC Emergency Health Services says their records show the ambulance arrived in just 10 minutes.

"Our records indicate the call came in at approximately 8:46 p.m. on April 12, and the ambulance arrived on scene approximately 10 minutes later at 8:56 p.m. The patient was taken to hospital in stable condition," says a spokesperson for BCEHS.

"We’re sorry to hear about the stress the triage conversation with our dispatch caused for this 911 caller, and our best wishes are with the patient for a full recovery."

The union representing paramedics in B.C. has been sounding the alarm about staffing levels in the Central Okanagan for months.