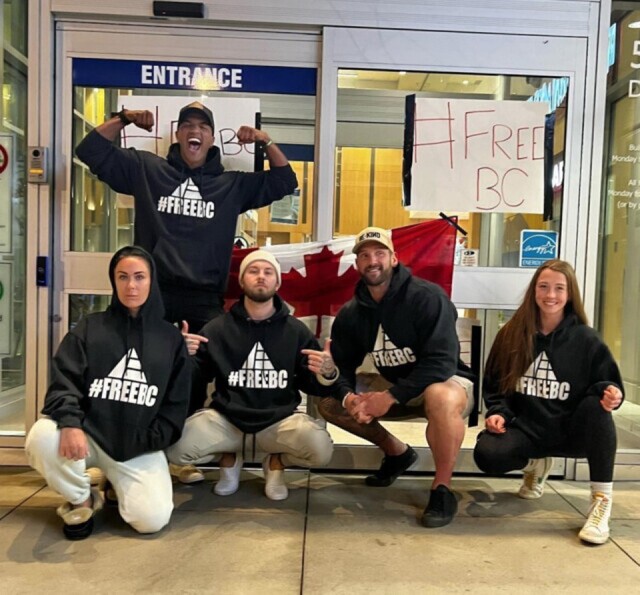 Iron Energy gym in West Kelowna says it will not be closing, despite a court order to do so.

“Guess what, we were ordered to close before — the only difference is now it's coming from the court versus Interior Health,” said co-owner Brian Mark in an Instagram video.

“But it's the same closure order. And we're still here. Guys, I think that it's time that we make a stand.”

Mark says they plan on filing a court challenge to the closure order, but lamented the fact that it would take many months before the challenge got a hearing.

“Why is it up to the small business owners to stand up and fight? Why is it us? Why are we the ones that have to risk our livelihoods to stand up for Canadian freedom?”

A West Kelowna gym that openly defied COVID-19 mandates has been ordered to close for six months.

Iron Energy Fitness Centre has been the subject of more than 40 complaints about people not wearing masks or having to show their vaccine passport, according to court documents.

"That order remains in effect," Interior Health lawyer James Goulden said in B.C. Supreme Court Friday, noting non-compliance is a health and safety risk. "That order has not been complied with."

Goulden said after the Feb. 3 closure notice was taped to Iron Energy's front door, the company's Brian Mark posted a video to social media showing himself ripping it up.

The health authority's lawyer noted 21 violation tickets have been delivered to the gym's management; all have been disputed in provincial court, he said.

On Feb. 15, Interior Health applied to the court for an injunction to have the gym shut down. Iron Energy’s lawyer Terry McCaffrey said the short notice for the application denied natural justice and procedural fairness to his client.

He said the notice documents had been given to a gym employee on Feb. 16, not to a company officer or director.

During questioning by Chief Justice Patrick Dohm, McCaffrey said the employee gave the documents to a company director. Then he confirmed director Brian Ralph knew of the documents that day.

McCaffrey pressed on, saying the notice wasn’t served on the gym itself.

“If it’s posted on a door where you carry on business, it should come to their attention,” the judge said. “Either that or they’re wilfully blind.”

McCaffrey said health officers have provided the gym with no COVID-19 data or information on how vaccine passports reduce transmission.

“No evidence has been provided to Iron Energy,” he said.

According to a notice of civil claim, Interior Health received complaints between September and December that the gym was not requiring vaccination proof to enter.

On Jan. 6, a closure order was made to the gym under the Provincial Health Act. Mark was given a copy and another copy was posted on the gym door. That same day, West Kelowna RCMP fined Iron Energy $2,300 for non-compliance.

A couple days later, one of the defendants said the gym did not intend to check vaccine passports or comply with public health orders, the notice said.

McCaffrey told the judge the gym is “pro-choice.”

Dohm was at times skeptical as to how an injunction could be enforced.

“I know if I grant it, I can’t really rely on the government to enforce it,” he said. “How can I rely on a government that won’t enforce court orders?”

Goulden, however, said the RCMP could enforce it.

The defendants' lawyer had wanted to adjourn the case but Interior Health’s lawyer stressed it was a matter of urgency.

Dohm decided just to hear the application as it applied to Iron Energy.

The gym continued to operate as of Friday evening.