Developer feels SolAqua is a win-win for West Kelowna 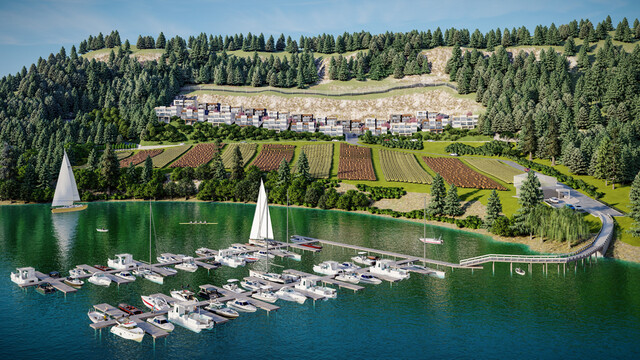 Developers of a proposed townhouse project along Campbell Road believe they have brought forward a "very responsible development," that is a "win-win" for everybody.

If built as is, the development would add between 45 and 60 townhomes, an identical number of moorage slips, plus a vineyard and potentially small winery and tasting room.

Dubbed SolAqua, the project is the second iteration of the much larger Blackmun Bay development West Kelowna council voted down more than two years ago.

Blackmun Bay began as a 740 unit apartment, hotel and townhouse development with buildings as high as 14 storeys.

While it was eventually scaled down to eight storeys and 350 units, it was shot down as being too big, and the developer chastised for ignoring the concerns of Casa Loma residents.

"We have worked very hard to rethink this project," Robert Moskovitz, executive vice president, development and operations of Landstar, the company proposing the project told Castanet.

"We are very proud of the fact we have come up with a vision that's a byproduct of four years of listening to the community.

"I believe we brought forward a very responsible development that fits well within the character and form of West Kelowna."

Even SolAqua has been scaled down somewhat from what was originally presented to council back in the summer.

That iteration included a 242 slip public marina which council said was too big. Coun. Doug Findlater called it a non-starter.

That number, Moskovitz said, is something that had been allowed by both the provincial and federal governments.

"But, council believed they didn't want to see a public marina in this area, they just wanted to see boat moorage associated with the local residents.

"When you are in business you have to learn to pivot and create the best you can under the circumstances."

Despite the scaled back project, there is still opposition to development of any kind within the Casa Loma neighbourhood, mainly due to increased traffic it will bring and the fact the two-lane Campbell Road provides the only way in and out of the community.

"Will there be times during the day when there is more traffic, likely. But, we're going to do everything we can to improve the road, widen the road, to allow some pedestrian walkways. So, there will also be some additional improvements that benefits everyone."

Overall, Moskovitz says he believes the new project is one that will benefit buyers and become an iconic development within the city.

Council have given initial approval for the development. A public hearing is scheduled Feb. 9.