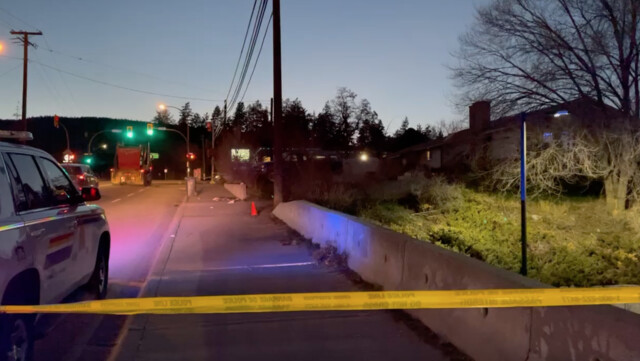 RCMP say a man is in custody following an aggravated assault in West Kelowna this afternoon.

Police were called for a report of a man assaulting a woman on a sidewalk in the 2500 block of Main Street, West Kelowna at 3:20 p.m.

While police did not specify the type of attack, witnesses told Castanet it was a stabbing. The victim was rushed to hospital with serious injuries, said Cpl. Tammy Lobb.

The suspect ran away but was captured by officers after a foot pursuit and arrested for aggravated assault. The man is in police custody as the investigation into the incident continues.

The investigation is being led by the West Kelowna RCMP General Investigation Section, which say the attack was not random and the parties were known to each other.

Anyone with information or anyone who may have witnessed this incident is asked to contact West Kelowna RCMP - GIS at 250-768-2880 or by calling Crime Stoppers at 1-800-222-8477 or leave a tip online at www.crimestoppers.net.

An employee of a business near the crime scene says a woman was stabbed by a man in front of the home now wrapped in police tape.

The witness said the assailant was captured by police a short distance away.

The condition of the victim is not known, but emergency crews were observed giving her care on the sidewalk.

The Kelowna RCMP says it is preparing a brief statement on the incident. Officers are still at the scene collecting evidence.

The home at the corner of Main Street and Paynter Road downtown Westbank is wrapped in crime scene tape.

Traffic is still getting by on Main Street/Hwy 97 with a lane closure in place.

A police incident is slowing westbound traffic on Highway 97 in downtown Westbank.

Details are limited, but traffic is backing up as far as Butt Road.

Castanet has a reporter en route to the scene and will update.

Send your photos and video to [email protected]