The Mount Law wildfire continues to burn at an estimated 800 hectares in size and is out of control.

According to BC Wildfire, cooler temperatures and some light rain are helping on the front lines but extremely dry conditions remain.

An additional 18 properties in the Regional District of the Central Okanagan and Peachland have been added to the Evacuation Alert area for the Mount Law Fire.

Residents in the alert areas are advised to be ready to leave their homes at a moment’s notice.

The EOC has also expanded an evacuation order onto Crown land in the southeast corner of the fire.

The expansion order does not include any private property. The Gorman Mill site remains under evacuation alert.

All other evacuation alerts and orders remain in effect.

For a map of the affected properties, click here.

Activity at the Mount Law wildfire has subsided significantly from earlier in the day.

High winds have calmed and the fire appears to be mostly smouldering on the ground for the time being. Trees are no longer candling and the smoke plume has reduced.

Some very light rain is moving through the Central Okanagan at the moment.

All evacuation alerts and orders remain in place. 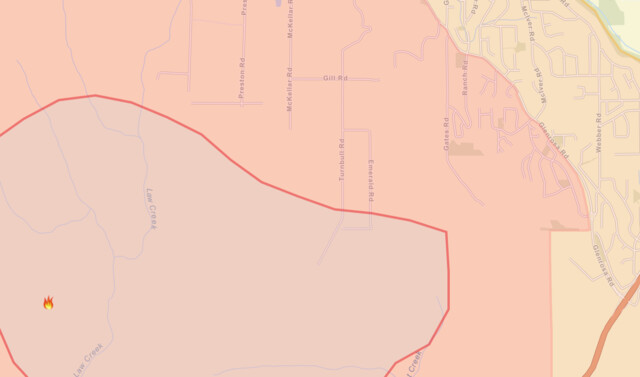 Photo: BCWS
An approximate perimeter of the Mount Law wildfire in Glenrosa

Winds have again picked up again in the Central Okanagan, which will make the job of fire crews battling the Mount Law wildfire more difficult.

Environment Canada is forecasting that those winds will continue and gradually die down this evening. There is also the possibility of rain showers in the Interior Monday afternoon with possible lightning as well.

Central Okanagan Emergency Operations and BC Wildfire have not released an update on the fire since about noon.

At the peak of the inferno on Sunday night, 25 fire trucks and 80 firefighters from eight municipal fire departments were in Glenrosa battling the flames.

“We are actively fighting fires in the backyards of homes on a number of streets in Upper Glenrosa, and we'll continue to do that today,” said Brolund, explaining their primary objective is structural protection in the neighbourhood.

Crews worked frantically through the night to build guard around Glenrosa.

Beyond the “small number of structures” that were impacted, Brolund said they were “very successful in the operations last night.”

He could not offer specifics on structural losses.

“Because this is a dynamic and changing situation. Today our focus will remain on firefighting,” he said.

Brolund said the Mount Law fire was putting up heavy ember showers Sunday night and was spotting ahead of itself “on numerous occasions.”

“And that is certainly what drove some of the decisions that were made around the evacuation order areas for example, making sure people were out of the way so that we could do our work in those neighbourhoods that came to pass,” he said.

There was a small group of residents on evacuation order that refused to leave, something fire officials called “concerning,” although it was “nothing to the extent that we saw the other fires regionally.”

One firefighter sustained minor injuries last night, but he will recover.

Brolund said when the fire first broke out in the valley draw between Mount Drought and Mount Law, it ran up the hill quickly burning at rank 4/5, leading for help to be called in from across the region. Fire activity in BC is ranked on a six point scale, with six being the highest.

Wildfire officials and the City of West Kelowna are holding a major information update for 11:30 a.m. Monday morning to update citizens on the progress of the Mount Law wildfire and the White Rock Lake wildfire, both of which continue to burn out of control and are threatening structures and property.

Air tankers and helicopters are hitting the fire hard from the sky.

The virtual news conference hosted by Central Okanagan Emergency Operations will not be live streamed, but Castanet will provide immediate coverage.

It appears some structures may have burned overnight at the Mount Law wildfire in West Kelowna.

Central Okanagan Emergency Operations says this morning that "early reports indicate limited structural damage" – however, that does not rule out any damage.

Details are still coming in, and so far the complete picture is unclear.

More information will be provided to property owners and the media as it becomes available, the EOC said shortly before 9 a.m.

"Cooler temperatures are forecast for today and tomorrow, but fires remain out of control and are expected to be active today. Central Okanagan and BC Wildfire crews will continue suppression efforts on the ground and in the air today. People are asked to stay away from areas close to the fires to ensure the access and safety of first responders. Boaters should avoid areas of the lake being used by air support."

Residents in evacuation alert areas are advised to be ready to leave their home at a moment’s notice. They should be prepared to be away from their home for an extended period.

Residents requiring assistance, including lodging, should report to the reception centre at 1480 Sutherland Ave. in Kelowna, which will be open today from 10 a.m. to 6 p.m.

Visitors from outside of the Central Okanagan should check DriveBC.ca to confirm highways are open before heading home.

Anyone wishing to check whether friends or family have been evacuated can use the “Find an address or place” search feature on the website at cordemergency.ca/map.

The Regional District of Central Okanagan has closed six regional parks Monday morning due to the Mount Law wildfire.

The Region RDCO Communications officer Bruce Smith says, "for everyone’s safety, please stay out of these parks. If necessary, this will also allow structural and BC Wildfire crews to safely do their work."

Smith says these parks will remain closed until it is safe to allow visitors once again.

Smith says “we never want to close our parks, but in this case keeping everyone safe and not straining our first fire responder resources is more important.” Smoking, open flames, campfires and any type of barbeque are not allowed in RDCO parks due to the current fire danger.

Many other regional parks remain open are not affected by this closure.

The BC Wildfire Service says this morning that the Mount Law wildfire above West Kelowna is now estimated at 800 hectares in size.

Further updates to come as the day progresses.

Fire crews from across the region continue to battle the Mount Law wildfire in West Kelowna.

The aggressive fire sparked Sunday evening and quickly grew to 200 hectares in size, prompting the evacuation of hundreds of homes in Glenrosa, Crystal Mountain, Peachland and the Regional District of the Central Okanagan.

It continues to burn out of control.

The fire is suspected to be human-caused and will be under investigation, the BC Wildfire Service said late Sunday.

Central Okanagan Emergency Operations described the situation as "dynamic and evolving" about 12:45 a.m.

Trees were candling as the wildfire slowly made its way down the hill above Glenrosa.

The fire is widely visible across the Central Okanagan.

BC Wildfire Service responded with 11 ground personnel, and multiple pieces of heavy equipment on Sunday. Personnel from the West Kelowna and Vernon fire department are also assisting.

Four air tankers and four helicopters worked on the fire until last light.

We will have updates on the situation as more information becomes available this morning.