Disaster has been averted for now, Brenda Creek fire skirts past BC Hydro transmission lines 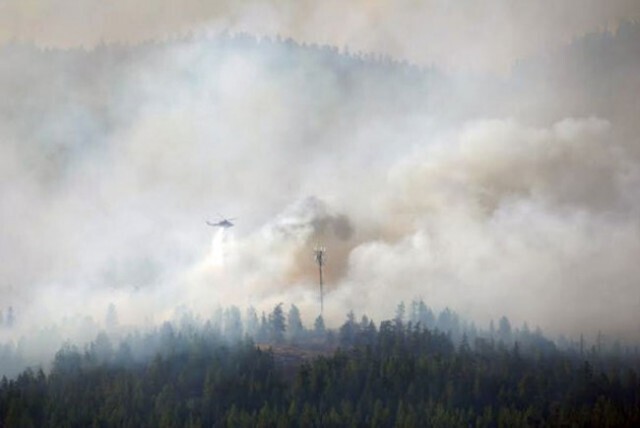 The Greater Westside power grid is safe - for the time being.

BC Hydro spokesman Dag Sharman says they have been told by the BC Wildfire Service the Brenda Creek Wildfire, burning south of the Okanagan Connector has passed the utility's transmission line.

That line represents the only source of power for more than 60,000 customers in West Kelowna, Peachland, WFN lands and rural property within the Greater Westside area.

Sharman says the fire was burning in the Brenda Lake area near Brenda Mines where BC Hydro lines pass.

"It didn't interrupt service and it did not, to our knowledge, do any damage to our infrastructure."

Sharman says BC Hydro has crews standing by in the area to inspect the lines once wildfire gives them the go ahead to do so.

Crews are also ready to do some fire mitigation in the area around the transmission lines, add retardant and remove some vegetation.

While the fire has passed for the moment, Sharman says we're not out of the woods just yet.

"The fire is still burning in the area, and with a wind change, it could come back to the line."

The fire, which sparked Wednesday afternoon, is now estimated at 400 hectares in size, and listed as out of control.

Residents within the Greater Westside are are still being advised to prepare for the possibility of a power outage due to the fire.

It's the worst nightmare for anyone living within the Greater Westside area - an extended power outage.

The area north of Summerland, encompassing West Kelowna, Peachland, WFN, and rural properties is the largest area in the province without a redundant source of power.

Meaning, if power is lost for any reason, there's no alternative source.

The transmission lines, which run from the Merritt substation into West Kelowna, are threatened by the 400 hectare Brenda Creek Wildfire.

Officials with the BC Wildfire Service are not able to identify exactly how close the fire is to those transmission lines, however, the Emergency Operation Centre is advising the approximately 60,000 customers served by the transmission source to prepare in the event there is a power outage.

In an updated news release Thursday afternoon, the EOC says it has a team working on advance planning in the event of any potential interruption in electrical service.

Castanet reached out this morning to BC Hydro for an update and has not received a response. Castanet has also requested information from the City of West Kelowna on how an outage would impact infrastructure like water treatment plants. This story will be updated as we get answers.

The region dodged a bullet in 2014 when the Smith Creek Wildfire crept dangerously close to the power grid.

That fire, plus a lengthy outage in the fall of the year resulting from a fire along the transmission route, accelerated talks between the City of West Kelowna and the province.

Then premier Christy Clark, the MLA for the region, agreed to get it on the books for BC Hydro.

And, while the utility has been studying the matter for close to a decade, a final decision on a preferred route still has not been determined.

An underwater route from Kelowna is being studied again after estimates on a second line from Merritt came in higher than BC Hydro anticipated.

Both are estimated to cost more than $200 million. It will be 2023 at the earliest before construction can begin on whatever option is selected. 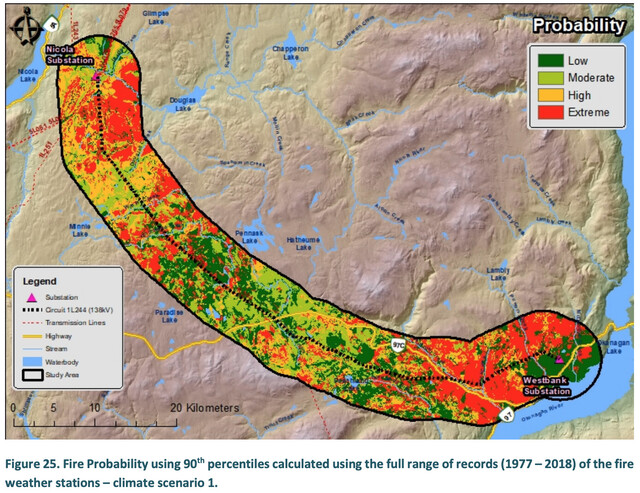 Photo: BC Hydro
Fire probability along BC Hydro's only line powering West Kelowna