Wildfire south of Peachland under control, traffic slowed on Hwy 97 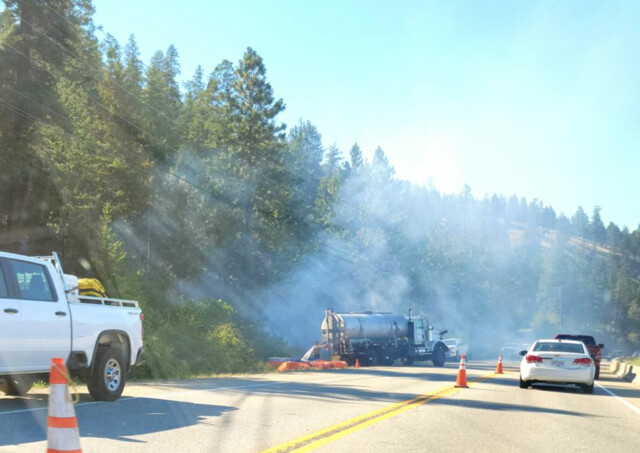 The wildfire south of Peachland above Highway 97 appears to be nearly extinguished.

Smoke is no longer emanating from the fire site. The blaze is classified as "under control," meaning no additional spread is expected and the fire is 100 per cent contained.

Delays on Highway 97 though the fire zone have also been reduced. Traffic is still single-lane alternating, but the large backlog of cars has now cleared significantly. Drivers should still expect some delays while moving through the area overnight.

Significant smoke and open flame are no longer visible from the fire.

Crews appear to have gotten a handle on a flare up of activity.

The BC Wildfire Service says the fire is now classified as under control.

The highway is still down to single-lane alternating traffic. Drivers should expect delays in excess of an hour, according to some caught in the backlog that is now stretching nearly to Ponderosa Drive.

Activity of a wildfire south of Peachland has picked up again as temperatures swelter.

Smoke and flame is again visible from the blaze above Highway 97. Castanet has placed a call to the BC Wildfire Service, which has resources still at the scene.

The highway remains open to single-lane alternating traffic. Motorists should expect major delays while travelling through the area.

Drivers should not detour onto Peachland’s Beach Avenue to avoid traffic, as things are also jammed along the waterfront.

“Cars have been backing up all afternoon along the Beach, idling, waiting to get through the traffic light at Princeton Avenue and Hwy. 97,” said a resident in the area. 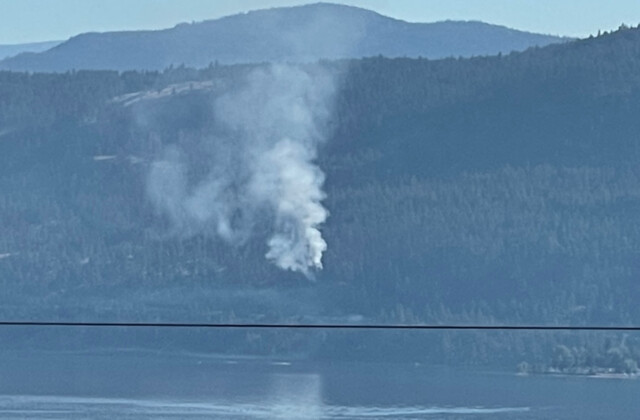 Photo: Contributed
A wildfire south of Peachland picking back up in activity at about 5:45 p.m.

BC Wildfire continues to battle a blaze south of Peachland but are getting a handle on the fire.

"It's listed at 1.8 hectares in size and that's not because of growth but because of more accurate tracking and mapping," says BC Wildfire spokesperson Madison Smith.

The fire is also still listed as out of control and Smith indicates crews hope to know more about the status of the fire by 7 p.m. tonight.

Highway 97 south is now open to single-lane alternating traffic and there are still 10 BC Wildfire personnel on scene along with local fire crews and three helicopters.

"They're gonna want a good handle on this before leaving because it is so hot."

Motorists should still expect significant delays while moving through the area.

"Thank you for your patience while crews and equipment continue to work in the area," said the West Kelowna RCMP.

Fire crews continue to make significant progress on the fire and appear to be mopping up.

Fire activity has subsided significantly as helicopters continue to hit the blaze from the sky.

The fire has been reduced to a smouldering ground fire and tankers are no longer at the scene.

An RCMP officer at the scene tells Castanet they are hoping to have the highway reopened to single-lane alternating traffic in 15 to 20 minutes.

BC Wildfire is battling a blaze that broke out south of Peachland just after 9:30 Monday morning. The fire has grown quickly to 0.3 hectares.

There are 10 BC Wildfire personnel on the scene as well as municipal crews for support. Three air tankers are hitting the fire with retardant and three helicopters are standing by to drop water using buckets once the tankers have completed their task.

"We are hitting it pretty hard and we are confident we are getting the upper hand," says BC Wildfire spokesperson Madison Smith.

Smith says no structures are threatened but the highway is expected to remain closed until the fire is considered held or under control.

West Kelowna RCMP are asking motorists to avoid Highway 97 south of Peachland due to the fire. Drivers are being turned around well outside the fire area.

"The length of the closure is unknown at this time. We are asking everyone to remain away from this area while personnel and equipment is in the area."

Municipal fire crews have now handed command of the fire over to the BC Wildfire Service.

Municipal firefighters are remaining at the scene in support of the provincial teams. Helicopters are actively bucketing the fire, which is burning on very steep terrain.

BC Emergency Health Services is also responding to the area for a report of a vehicle in the ditch off the highway south of the fire zone.

Air support from the B.C. Wildfire Service has now arrived on scene and is attacking the fire.

Motorists on Highway 97 are now being turned around, suggesting the closure will be lengthy.

The fire has continued to burn up the hill out of range of hose lines, but towards an area that was burned in 2018 by the Mount Eneas wildfire.

Highway 97 is now closed due to a brush fire between Peachland and Summerland.

Eyewitnesses report the fire is running up the side of the hill and has tripled in size since it started a short time ago.

Fire crews are working on a brush fire off Highway 97 south of Peachland.

Glen and Lisa Gallie tell Castanet they were floating in Okanagan lake near the Peachland marina when they spotted the smoke. Fire crews have called in helicopter support from Kelowna and Penticton.

"We don't see any air support yet but there are lots of fire trucks running along the highway."

The fire is burning up towards the area burned by the 2018 Mount Eneas fire, which will likely significantly slow its growth.

This is a developing story and we will update as more information becomes available. Castanet has a reporter en route.